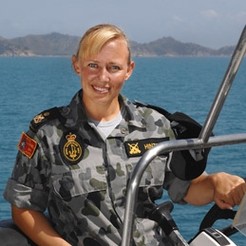 In an effort to improve opportunities for women in leadership roles in the Royal Australian Navy, the Australian Government is expanding its Navy Women’s Leadership Program in 2010. The inaugural program was first conducted in 2009 with 28 women and was the first of its kind for the Australian Defence Force (ADF).

‘The program provided the opportunity for female leaders, from the rank of Leading Seaman to Commander and APS equivalents, to participate in five Australian Women and Leadership Forum events,’ says Greg Combet, Minister for Defence Personnel, Materiel and Science.

The programs are being run as part of the New Generation Navy initiative, which seeks to improve the Navy’s culture, leadership and structure. The Navy Women’s Leadership Program aligns itself with the objectives outlined in the Chief of Defence Force (CDF) Action Plan for the Recruitment and Retention of Women in the ADF.

‘The new mentoring program is highly regarded and has been implemented in many corporate and public sector organisations around Australia, as part of gender diversity strategies to help women achieve their career potential and counter the gender imbalance in the workforce,’ says Combet.

Last year’s program was such a resounding success that this year’s program has been expanded to include a women’s mentoring program for an additional 50 Navy women. ‘The female officers, sailors and public servants who completed the program provided extremely positive feedback and have indicated strong enthusiasm and motivation to implement their new skills in the workplace,’ says Combet.

‘This is a fantastic initiative that empowers women in the Navy to realise their leadership potential and help advance their careers. The plan outlines the commitment of the CDF and Service Chiefs to increase the number of women recruited and retained by the ADF,’ says Combet.