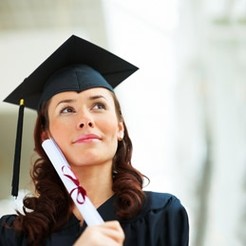 The Australian Bureau of Statistics (ABS) has published estimates of the return on investment (ROI) for university bachelor degrees – and the news is good for uni graduates.

Despite the lost wages and expenses incurred over the time it takes to complete a four-year bachelor degree, graduates can expect to enjoy a significant rate of return – especially female graduates. With the nature of work changing to now place greater emphasis on things like communication and relationship skills, the return for women, who tend to excel in these areas, is particularly high.

For men, the rate of return for investment in a university education increased from 13.1 per cent in 1981 to 19.6 per cent in 2001, and then dropped to 15.3 per cent in 2006; over the same period, it ranged from 18.0 per cent to 17.3 per cent for women. The return on educational investment generally increases over time for both males and females.

Simply put, education increases earnings and helps graduates weather economically unstable times. Despite market volatility and an inflation rate of 9.3 per cent between 2006 and 2009, 2006 graduates managed to increase their salaries by 35 per cent by 2009. Industries that earned the highest salary increases include management and commerce, IT, engineering, teaching, health and creative arts.

It has been shown that gaining additional qualifications is the single best way to increase your lifetime salary. Not surprisingly, many graduates continue to further their education after completing their undergraduate degrees – often not immediately after graduating, but a few years down the track. Three years after graduating, 27 per cent of men and 29 per cent of women continue to study – especially those with ambitious career goals.

The benefits of education are multi-faceted, with university graduates more likely to be employed in the labour market and enjoying higher wages. When the economy goes through its boom-and-bust cycles, those who are educated tend to experience less employment instability and unemployment than their less educated counterparts.

In general, around half of the ROI for a university education is a result of greater labour market participation, and half is due to the greater productivity of educated people.

However, in the years between 2001 and 2006, strong economic and employment growth lessened the gap between those who have and haven’t gone to university, and the mining boom has decreased that gap even more. The resources boom has meant that workers of all educational levels are gaining employment, including those without degrees.

Nonetheless, the return on a university degree is a substantial one, so a university education is still one of the best investments in the future that you can make.

Check out our full range of online university and vocational education courses.

Next article: Life after university: how to get your first â€™realâ€™ job