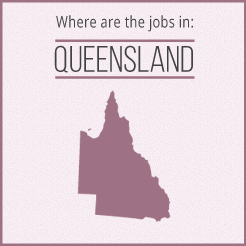 Jobs Australia 2014: Where are the jobs in Queensland?

Queensland is the third largest employing state and employment growth in the five years to November 2013 was 5.6 per cent, slightly below the national average of 6.5 per cent.

More than 40 per cent of the state’s workforce is employed outside of the Brisbane-Gold Coast area. Mackay-Fitzroy-Central West is a large employing region with 227,000 workers, followed by the Sunshine Coast with 162,900.

Labour market conditions in North Brisbane strengthened over the last year, with employment increasing by 7.9 per cent and unemployment decreasing by 0.2 percentage points to 4.5 per cent in February 2014. The participation rate also rose by four percentage points to 69.7 per cent, above the national rate.The growth in regional employment over the past five years (7.1 per cent) was greater than the growth experienced in Brisbane (5.1 per cent).

Workers in Queensland are less likely to have post-school qualifications with three per cent less workers holding qualifications than the national average.

The report notes that 10 of 19 industries experienced jobs growth.

Accommodation and food services was increasing by 8.1 per cent in the previous report and is now in decline by 9.9 per cent.

The strong decline in agriculture, forestry and fishing has seen figures move from a reduction of 19.3 per cent to 29 per cent.

Arts and recreation services have seen a large increase in growth rates between reports with a decline of 11.6 per cent now turned around to be an increase of 27.2 per cent.

Where are the jobs?

Highest proportion without a post-school qualification:

Gold Coast (49 per cent) and Mackay-Fitzroy-Central West (48 per cent).