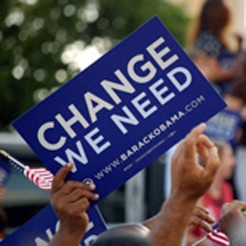 When Barack Obama became the 44th President of the United States, he ushered in an era that promises unprecedented and inspirational change. As the first ever African American President, Obama managed to secure a historic election victory by promising reinvention and revitalisation.

He came to power with America facing the worst recession since the Great Depression, fighting two wars and the increasing threat of climate change.

When he stood up to declare victory on 5 December, he showed that change was not only possible – but was necessary.

He told the story of a woman named Ann Nixon Cooper to show how much could be achieved over the course of one lifetime.

At 106 years old, Cooper was 'born just a generation past slavery; a time when there were no cars on the road or planes in the sky; when someone like her couldn't vote for two reasons – because she was a woman and because of the colour of her skin.'

In her lifetime, she saw women gain the vote, democracy survive numerous conflicts, a man land on the moon and an African American man do what would have seemed impossible when she was born – become President.

As Obama whips up energy and hope for a better future, he has also made us think about how we can bring positive change to our own lives.

Full-time workers spend at least 40 waking hours at work each week. So the first step to happiness could be moving out of a job you hate or bringing new life to a stale career. Why not harness the future and change your career the Obama way?

The global financial crisis is hitting the employment market hard. For some this may mean that holding onto your job while the storm passes may be the only way to go. For others redundancy could mean that the winds of change are inevitable.

But, while changing careers is not an easy ride, the confidence to put in the hard work and follow your career dreams is one that will pay off financially and psychologically. And don't underestimate your ability to achieve what you want – two years ago, Obama no doubt questioned the possibility of his own dream to become President.

Even if changing career paths completely isn't an option, you can still rejuvenate the job you are in. Improve the feng shui of your desk, focus on projects you enjoy, create friendships in the office, think about how you can move up the career ladder or simply talk to your boss about flexible working hours that could give you a greater work–life balance.

Change is as good as a holiday – but maybe a holiday is also as good as a change. If you are feeling sluggish and counting down the minutes until you can clock off, using some of your annual leave to clear your head will help give you a plan for change.