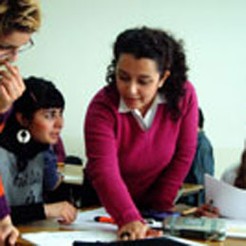 A review of our higher education system is set to be released for public discussion in mid-December – and it could revolutionise the way we view TAFE institutions and universities.

The review, chaired by former University of South Australia vice-chancellor Denise Bradley, will advise on the funding of higher education, student income support and research capacity.

However, it will be their advice on the boundaries between university and other tertiary education that are likely to have the most resounding effects. It's anticipated that the review will recommend a blurring of those boundaries and allow TAFEs to offer professional degrees.

The review comes as a Victorian TAFE won approval to offer places in a three-year nursing degree, despite an outcry from some in the profession who believe it will dilute the industry's reputation.

The Australian Nursing Federation fears the move will drive down wages and create another class of nurses, who are already separated into degree-educated registered nurses and enrolled nurses.

The TAFE's CEO, Bruce Mackenzie, says funding would be a step towards a 'university college' which would offer vocational training plus a range of degrees that would focus on applied learning in cooperation with industry.

He said the move would create greater diversity and regulate the relationship between the two systems.

In 2006, only a third of the 18 000 domestic VET students who were admitted to university received credit for their studies.

A new system involving guaranteed credits would boost the number of transfers through a streamlined application process.