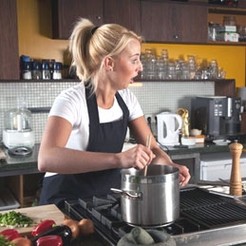 With Celebrity MasterChef set to hit our television screens next week, reality TV fans, foodies and ordinary Australians are eager to see how a politician, news anchor, beauty queen, journalist and fashion designer handle the heat in the kitchen.

The show is predicted to be a hit, with a smorgasbord of taste sensations, innovative recipes and fabulous food – with a little bit of celebrity glitz and glamour thrown in of course! Returning to the judging panel are crowd favourites Gary Mehigan, George Calombaris and Matt Preston.

Following the surprise success of the debut of MasterChef earlier this year, the celebrity version is likely to attract more die-hard food fans. In the first series, a group of amateur cooks took to the MasterChef stovetops to battle it out for the title, a book deal and $250 000 to help them start a restaurant.

Celebrity hype aside, the show is an inspiring hit for anyone interested in breaking into the food industry. Viewers watched ordinary people with a passion for food and cooking, who were already well into their careers, take the leap and try something they’ve always dreamed of. An IT consultant, artist and advertising executive all put their regular jobs on hold in an attempt to change their careers for good and become a chef. While entering a reality TV show isn’t the most common way to change your career, it can be worth a shot and can definitely motivate others!

Also on the top of the to-do list for aspiring chefs is the Sydney International Food Festival. October is Good Food Month and there are lots of events planned for all 31 days of the month, including dinners, food markets, discussions, tastings and hands-on cooking classes. The highlight event of the festival is the World Chef Showcase weekend (9 –11 October), which is a combination of demonstrations, book signings, talks and tastings with top chefs and food writers from all over the world. These guys are seriously at the top of their game when it comes to the food industry so if you want to be a chef, want to network with other like-minded people or are just crazy about food, then this event is a must-see!