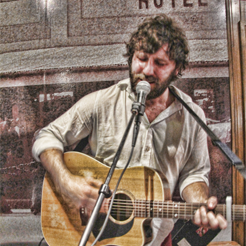 ‘I have always loved music, always sung but never thought it was something that people would want to come watch.’

Matt Boylan-Smith is a self-described ‘travelling troubadour’, whose travels have already landed him in some pretty amazing venues alongside some Australian music icons. Having shared a stage with performers such as Ash Grunwald, Tim Friedman, The Choirboys and The Potbelleez, he is edging ever closer to the headliner spotlight himself. Matt recently performed at the Australian Independent Music Awards, where he was a finalist in the Acoustic/Singer-Songwriter category, as well as at the 40th anniversary celebrations for the Sydney Opera House.

We spoke to Matt about why he chose the life of a muso and what has helped him turn his passion from open mic to Opera House.

Did you always want to be a musician?

I thought everyone always wanted to be one?! Alas, this is not always the case. I have always loved music, always sung but never thought it was something that people would want to come watch. Only since my first couple of years at university did I want to become a musician, and even then it was something that evolved out of happenstance.

What was your first instrument?

I played a little piano at school, but nothing more than school level. I was always interested in different instruments, the sounds they could make and their histories, but never gave it much practical attention. With this in mind I would have to say that my first instrument was the guitar.

When did the music dream start for you?

It started at university at open mic nights and playing around with friends. It seemed like a fun thing to be involved with and was a central part of people’s socialising. In a self-actualisation sense, it came when I walked past a second-hand music store and laid hands on my first real (stage) guitar. Upon owning and playing a quality instrument I felt I had to play it with the skill it deserved, and at that point I started to see myself playing music professionally.

What has been the highlight of your career so far?

I have a few, but recently I was asked to perform at the Sydney Opera House as part of the 40th anniversary celebrations. Just being backstage in the green room knowing the performers who had been there in the past was overwhelming.

What is one of the most challenging things about life as a musician?

It’s sometimes quite a solitary existence. Although I’m not afraid of quiet introspection, sometimes it’s difficult not partaking in normal, socially accepted ‘work’.

What is your study background?

I studied Communications Advertising at Charles Sturt University in Bathurst.

If you could go back a few years, what would you do to help your music career?

I would have started working harder on my writing. It’s something you have to constantly work on. Being able to write good copy doesn’t necessarily mean being a great songwriter.

Who is your ultimate music icon?

Justin Vernon, aka Bon Iver. He’s freakishly talented and constantly pushes boundaries with his music. Apart from that, his obscure lyrics are thoughtful and thought-provoking. You can find out more about Matt’s musical journey and see his upcoming gigs on his website.