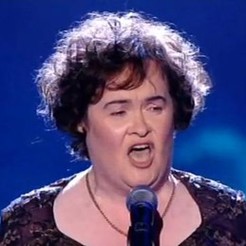 Scottish singing sensation Susan Boyle, who quickly rose to fame after her appearance on Britain’s Got Talent turned into a global phenomenon, has proven that lightning really can strike twice and she is more than just a novelty act with whom the public grows quickly tired. Her debut album shot to the top of the charts in Britain, the US, Canada, Ireland, Australia and New Zealand, as well as other international markets.

In America, she sold the most albums of any artist in a single week in 2009, with the largest ever sales debut for a female artist, and in Britain, she enjoyed the biggest first week of sales for a debut album in British chart history. It is estimated that sales of I Dreamed a Dream topped two million worldwide in its first week.
Boyle is currently outselling top acts like the Black Eyed Peas, Rihanna, Lady Gaga and 50 Cent (who has expressed a wish to collaborate with her).

Boyle is currently outselling top acts like the Black Eyed Peas, Rihanna, Lady Gaga and 50 Cent (who has expressed a wish to collaborate with her).

She has also landed her own TV special, and a documentary has been made of her life.

Not bad for a shy and retiring middle-aged Scottish woman whose dream of becoming a professional singer might have seemed, at first glance, far-fetched. If there’s one thing Boyle’s success proves, it’s that it’s never too late to succeed, and that self-belief and genuine talent will get you far.

That’s something to keep in mind if you’re feeling discouraged with where you’re at in your career, or feel that it’s too late to change and follow your dreams. It’s never too late – but you have to be willing to take a few risks and put yourself on the line. Boyle showed courage and self-conviction in the face of initial ridicule, and her detractors were soon gasping with delight and astonishment.

Like the little engine that could, we can all find inspiration from Boyle’s example: ‘I think I can, I think I can …’

Read about The Boyle effect at work