How do you choose what to study? In an ideal world, we would all do what we love and we’d do it well. But in reality, with changing economic currents and job saturation, it’s not just about doing what we love – we also need to consider salary and job prospects.

Once you finish uni, you’ll probably be eager to jump into the real world and find your first professional job ASAP. But there could be a range of hurdles that get in your way. If you stay aware of the obstacles when you’re choosing, studying or graduating from a degree, you’ll be more grounded and realistic about your future.

Demand in the market

The truth is, some degrees make you more employable than others. And, while you shouldn’t just choose a degree because you think it’s going to set you up for life – just like you shouldn’t choose your HSC subjects based on the ATAR they could get you – you do need to realise that finding a job at the end of your study could be difficult. Not impossible, just difficult.

The Australian Graduate Survey 2011 found that on average, 76.6 per cent of bachelor degree graduates who completed their degree in 2010 found full-time work within four months of graduating. The hot industries for graduate employment in 2011 were mining engineering (98.2 per cent), medicine (98 per cent) and pharmacy (97.3 per cent). So if you were planning to study, or are studying, a degree in one of these areas, you can probably bank on similar employment results in the next few years.

At the other end of the scale, humanities and language graduates struggled to find full-time employment within the first four months, with rates sitting at 64.7 and 65 per cent respectively – which can be a dampener for any arts students out there.

Employment trends are determined by demand and economic conditions. In financial downturns, recruitment is often the first thing that businesses tighten. Don’t be disheartened if it seems like your job prospects seem to be going down the drain. As economic situations change, so too will your employment opportunities. 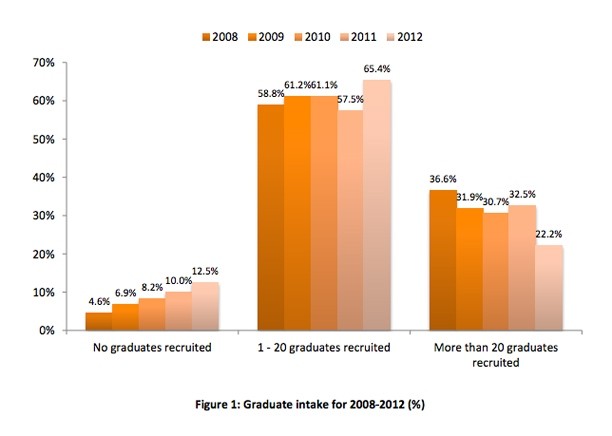 In Graduate Careers Australia’s annual Graduate Outlook Survey for 2012, 42.7 per cent of employers said that they prefer to employ graduates from particular universities or colleges. This was more apparent in the communications, technology and utilities industries (62.7 per cent). On the other hand, the government, defence and health industries held no preferences when it came to particular tertiary educators.

Don’t sweat it if you’re not going to a university with a prestigious reputation. Yes, Sydney University has a history steeped in status, and you can pretend you’re actually attending Hogwarts. But it’s often the smaller universities that develop strong industry-specific course content and therefore develop a great reputation in particular sectors.

Comparing the number of graduates in full-time employment will give you an idea of the employment rate for each university. However, you do need to keep in mind some of the other factors that play into these stats, such as the total number of students and any other variables that might affect the rate of employment.

The high-rolling fields with the highest median grad salary were engineering ($64,000), medicine ($60,000) and mathematics ($57,300). At the other end of the spectrum, visual and performing arts graduates fared the worst, with a median starting salary of $40,000.

In many fields, you’re required to start low but the earning potential balances this out. While accounting grads can expect a starting salary of $50,000, the average maximum salary reaches $159,383 (My Career, 2013).

However, you may need to be patient as pay rises are set to slow down in 2014.

It’s not the end

If you’ve read this article and now feel like you’ll never ever find a job – and when you do you’ll earn a pittance anyway – remember that a high salary doesn’t equate to high job satisfaction. There are many other elements that create a fulfilling career, and often you’ll only discover these a few years into the game.

Don’t be disheartened if it takes you longer than four months to find your first full-time job. There are plenty of other options: continue onto postgrad study, travel, take on part-time work. All of these will help you grow and develop your career in the end.