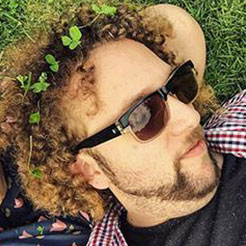 Freelance photographer, director and producer, Alex, has worked for himself for over 12 years (and still going strong). Working solo can be “hard” however it can have it's perks including the opportunity to visit “strange places and do things with strange people”

Starting in the biz wasn't easy, “while I’m established now and making enough to support my family, years ago I did have to take casual jobs in periods when I wasn’t. I worked in retail, in bars, in whatever I could to survive. But, crucially, I never did that full time. Keeping those jobs casual meant I could focus my energy into what truly counted – my career.”

Read more about his ups and downs as a freelancer….

Tell us about what you do

I don't have any official job title (I could care less about them, to be honest) … I’m a photographer and a director and a producer, which aren’t so much titles as job descriptions…

Quick note: a ‘project’ can mean many things….a single day magazine shoot, a multi-day print ad, a music video that takes 2 months to prep and a week to shoot etc. Every single one is different.

How long have you been in photography?

I started putting myself out there as a professional photographer around mid-2008. Before that, I was purely a filmmaker.

What did you study to become a photographer?

I didn’t! I studied filmmaking, then after a few years of that, picked up a stills camera. I honestly don’t know when. But, slowly, it took over. I’m self-taught in almost every aspect of photography, both the business and the skill.

Either a film director or a composer. But, just to confuse the issue, the first thing I studied at uni was architecture, because I thought I’d become a production designer (making sets and such on films) and the skills set needed was in that degree. It didn’t take long to dawn on me that, while I love design, the thought process wasn’t at all natural. And from there I enrolled in film school.

I can’t remember my first job in the business. But my very first job, when I was 14, was working a checkout at Woolies.

When did you first know you wanted to work in photography?

Around 2008. The stress of the filmmaking business was getting to me and I felt I needed more direct control into my creativity. That’s when I decided to switch it up.

There is no such thing as a typical day! A day can include a bunch of meetings at various advertising agencies, or catching up with crew or working from my laptop, which is usually marketing or managing the business itself (I got rid of the office a few months ago, don’t really need it – work from wherever I happen to be at any one time).

The actual shooting bit takes up barely 1/10th of my time if I’m lucky. Most of my professional time is spent communicating.

Erm…. where to start? Across many, many shoots, we’ve set fire to kitchens, flooded bars, built all sorts of crazy sets and props, shot some amazing people (including one guy who can do backflips with a steel sword down his throat)….

Perhaps most importantly and most interestingly, I’ve been witness to people’s stories via a camera. That is a true privilege.

The best part is that I get to go to strange places and do strange things with strange people. The variety is wonderful – I can go from shooting something fancy for an advertising campaign to shooting something – or someone – greasy and run down for a magazine within the space of a week. I love that variety. If I was doing the same thing day after day, I’d go mad(er).

The worst thing is making enough money and the all-important cash-flow. This is a hard, hard business, especially at the top end advertising where I work. There’s a huge amount of competition and a lot of pressure – when a shoot costs $10,0000 to make, the expectations are high. The problem is, those shoots do not come up regularly, and in between them, you need to make enough to live on. Sometimes, it’s fine. Other times, it’s a stretch.

What do you wish someone had told you before starting as a photographer?

Learn the business first. I have made every single business mistake in the book, being more of an ‘artist’ type than a business person, to use those hoary old clichés. I’ve learnt this stuff this hard way.

Where do people have to start to get into this field and what is a standard salary for this role?

There is no standard salary. The business model is freelance. Everyone is freelance. So if you’re expecting a salary, forget about it! Some years will be better than others.

To start, well, there are many ways. Some people study, some people jump right into working and getting experience. To do the kind of things I do, most people assist other photographers (something I didn’t do). I would suggest that’s a good path.

A few years ago I shot an extremely cool print campaign for Jagermeister. One of the most creative images I’ve ever created, and one of the most successful too.

Keen to work on your camera skills and begin a flashy new career? Get to it with a Photography Course – enquire today!