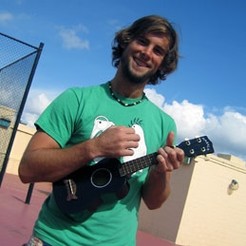 If anyone’s slightly frustrated with their work, or bored or just interested in doing something different, I think they should go overseas and explore.

Career FAQs interviewed Andy days before he flew out to South Korea to take an English teaching job in Sinchon, a district in Seoul.

Andy has completed a Bachelor of Arts in Philosophy at the University of Queensland. During his undergraduate degree he did an exchange year at McGill University in Montreal, Canada. He has travelled widely through North and South America, and Europe. Asia is his next port of call.

How did you start in the field?

Pretty much the same way everything I do does – I sort of fall into it.

I met a couple of people while I was travelling and we talked about it. I was thinking about what I wanted to do after graduation because I still had no idea. So I just spoke to a few people who had been there. There are a couple of good websites online. I applied for a job and once they decided to hire me, it all just fell into place. Visa processes are hard as hell but it’s pretty straightforward.

Do you think it’s useful for young people to travel and live overseas?

Absolutely, definitely. The more I travel, the more I realise it’s not for everyone. I know people who are completely contented where they are.

What qualities do you need to be an English teacher overseas?

I’d imagine patience and an ability to communicate. An understanding of English is probably useful too! One of the things they do look for is candidates without an accent. They call you when you do the interview and you speak to people from the school. I made sure that when I was talking, I didn’t slip into an Aussie accent.

Did you need TESOL qualifications?

I didn’t do TESOL. I just graduated from university with an arts degree.

Were there teaching subjects in that?

No. With South Korea you just need a degree, but that’s not the same with other countries. A lot of places require TESOL, especially outside Asia like Central America, South America and Europe.

Do you speak Korean?

Not a word! You don’t need to be able to. Also I’ve spent a lot of time travelling and managed to communicate without having a grasp of the local language.

So how do you teach English?

I think most of the kids I’ll be teaching already have a pretty firm grasp of English. I’d imagine they’re kids who have grown up learning English from square one, so it’s about refining the knowledge they already have.

Where will you be teaching?

I’ll be at a private language school teaching kids aged eight to 15. Class sizes are between eight and 12 pupils.

Will you get much time to travel while you’re over there?

Probably not much. The hours are 10am to 6pm Monday to Friday. I get weekends and public holidays off and two lots of five days off.

As far as pay is concerned I get 2,200,000 Korean won a month. Also airfares are paid for, I get free accommodation at a decent studio apartment and 50% of my insurance is paid for by the school. Upon finishing the year I also get a bonus equivalent to 1 months pay.

Where in South Korea are you going?

It’s in Seoul in Sinchon. It’s the university and arts district – one of the main ones with lots of cafes and bars and stuff.

What was the application process?

Well I just went onto a website called Dave’s ESL Café and from there I posted a resume and a cover letter and recruiters contacted me with jobs that were available. There’s an incredible demand for teachers over there. I got many job offers for teaching adults as well as kids, and I’m still getting them.

What's next for you?

There are a couple of paths I am considering. One is going back to uni and doing a Diploma of Teaching, which is why I am going to South Korea. The second is doing a Master’s in International Relations, and then I’ll try to get a doctorate scholarship. Or else I’ll just jam it all and pursue a hedonistic lifestyle. That has possibilities!

What advice would you give to others stuck at a crossroads with their career?

Don’t jump into one for the sake of it. Explore the opportunities.  Don’t feel confined by what other people expect of you.