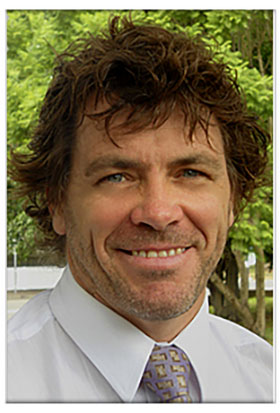 Aside from his morning coffee before he gets into the office and turning out the lights before he leaves, there is no such thing as a typical day for forensic psychologist, Bradley Jones. Since beginning in this field in 2011 he’s experienced it all and tells us how he found himself in this role that throws many ‘unpredictable’ curve balls his way.

What inspired a career in psychology?

To be honest I ‘fell into it’. I was studying a Bachelor of Applied Science (Psychology) thinking about going into a type of sports coach/psychologist field. The human anatomy and physiology were really interesting, but the psychology was one of those ‘oh my golly’ sort of things. So after the first year, I transferred to a Bachelor of Psychology to head in that direction. I took a year off after my honours year and then came back to do my masters.

Why did you choose to specialise in forensic psychology?

Hmmmmm it wasn’t my first choice. I had a previous career as a Detective in the NSW Police and did not want to deal with that area again. So I wanted to do Clinical Psychology as a ‘helper’ type person. I couldn’t get a Clinical Master’s position and I didn’t want to do a PhD but was offered a Forensic Masters and Education and Development Masters position. I knocked those two offers back and took a year off to just be ‘normal’, provide some financial security and pay off my uni debt. At the end of my year off I was again offered a Forensic Masters spot, and knowing I had to complete some form of Post Grad degree to achieve a specialisation I accepted it. A person can’t continuously refuse offers and still expect one to be available when ‘they want it’. Within about two months of starting the Forensic program, I realised that was the area for me! Everything made sense and it was like a duck to water.

What does your role involve?

My role involves explaining and interpreting offending behaviour for the criminal justice system, and how an individual’s cognitive and emotional functioning impacts upon them and their offending behaviour. It is a very varied role involving identifying why offending happened, what (if any) mental condition exists, mental illness of intellectual capacity played in the offending, the personality and thinking patterns that may have been associated with the offending, providing some explanation (NOT EXCUSE) as to how or why something did what they did, developing a treatment plan to reduce or prevent the risk of that happening again, and providing treatment to reduce future offending.

I also conduct clinical treatment of non-offending individuals who experience various psychological and emotional difficulties associated with their lives.

I initially wanted to be an Air Force Pilot but wanted to stay close to home, so I joined the NSW Police Force.

Interesting suggests ‘different’ or something that is ‘unique’ that imprints upon my memory, so I guess the only unique thing that I think happened to me once was when I was asked to see an elderly female client and assess for mental illness. The client had been charged with a significant assault upon a family member almost causing death and the court magistrate viewed the person was mentally ill. I was tasked with assessing the person after others had refused (not to self – there is a reason why others refused). So the client later attended my office with the female carer and I spoke with the carer. I felt reasonably comfortable believing I had an adequate understanding of the client and the offending. The assessment went well(ish) but there were times when the client was reluctant and difficult when discussing the actually offending. When probing further there was a change in her demeanour and behaviour resulting in her experiencing a psychotic episode involving auditory hallucinations with a ‘person/entity’ that was now angry with me. That person/entity was telling her to attack me with a knife she ‘had’ in her bag. She did have a bag that she always travels with and refuses to let her carers or others to look into. Early in the assessment, she said he always carries a knife in her bag in case she needs it. Her offending involved her attacking a family member with a knife. The knife involved in the offending was seized by police. Anyway after about 10 or so minutes of her ‘engaging/talking/arguing’ with the entity the client ‘returned’ to me/the assessment environment. When speaking to her about her ‘discussion’ she expressed what she had been told to do and she was quite agitated and angry.
Interestingly the office area was set out clinically and not forensically and as such my avenue of exit required getting past the client. So I just sat for a little while discussing ‘stuff’ to re-direct her emotional and feelings until it was appropriate to end the assessment.

My office structure underwent a significant modification after that.

Best: Other than that good feeling of “ that person is better now”, seeing the ‘light bulb’ moment of the client when ‘things’ make sense to them. Psychology is, in part, knowing how things and the thoughts lead to and result from behaviour. People who experience the ‘light bulb’ moment are often some of the best parts of my job (both forensic and clinical).

Worst: Forensic clients who think my job is to make excuses for them. These clients are unhappy with their service and thankfully rarely have a need to return.

What do you wish someone had told you before starting as a psychologist?

Nothing really. Perhaps not all psychologists are experienced or have the client’s need as the focus of treatment. I have met and have many client accounts of treatment by psychologists that clearly indicate that talking, breathing and relaxing strategies are secret to all psychological problems and offending behaviours. Even ‘think happy thoughts’ appears to be an appropriate psychological therapy…. So I guess being told that our profession is significantly flawed might have been a good thing to be told.

What qualities and skills should people have if they want to go into psychology?

Qualities would include self-reflection, flexibility in thinking, a degree of non-conformist, an acceptance and understanding that client focus is the key. There are so many skills that are important depending on the area of psychology. But I guess one of the things I have learnt most is that people think and behave similarly but differently. The similarities and differences are what makes treatment difficult. A good psychologist accepts this and designs their treatment based on that.

Think about going to a clothes shop and buying an outfit based on gender, age, weight, height, arm length and leg length. Fit me a suit based on that, then apply that same suit to everyone who has those exact features… would the suit ‘fit’ that person? We have not discussed complexion, hair, body shape, suit colour, if it’s winter or summer, pleats, double pleats etc.

There is never one size suits all. Psychology training has a tendency to give generic treatment paradigms (talking, relaxation breathing, progressive relaxation therapy, ‘happy’ thinking patterns) that are generic. These do have success in giving the icing on the cake. But if there is a problem with the cake itself, icing doesn’t fix the taste of the cake.

Recently beginning my PhD in a field of Investigative Psychology, not sufficiently studied or acknowledged within Australia. Many individuals hold themselves out to be ‘criminal profilers’ without the appropriate studies to support that. My current studies focus on offending patterns of behaviour of Australian offenders under the current world expert in Investigative Psychology.

Continuing with my practice, supervise and train my intern(s), continuing my PhD and joining the RAN(Royal Australian Naval) Reserve as a Psychologist…. Perhaps writing a book.

Connect with Bradley on LinkedIn

Want to know more about the human mind works? Our courses in Forensic Psychology and Psychology can help! Enquire today.