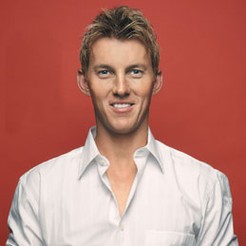 Cricket has played an important role in Brett's life ever since his older brother, Shane, introduced him to the game at the age of eight. Brett's most recent achievements have been recognised with awards such as the 2008 Australian Test Player of the Year, the Allan Border Medal 2008 for Cricketer of the Year, and Player of the Series for the 2007/2008 Test series against India.

Although cricket is Brett's first priority, he'll happily tell you that he loves doing a million things at once. It's no surprise, then, that he manages to find time in his busy schedule for his family, songwriting, fishing, fashion and, in the not-too-distant future, starring in Bollywood films.

When did you decide you wanted to play cricket professionally?

I'd wanted to play cricket for Australia since I was eight years old and, from that time, there was never a doubt I wouldn't play cricket.

Did you pursue any other job when you were younger?

I completed a retail traineeship with Barclays Menswear which gave me the opportunity to learn some very important business and life skills. I still use these skills on and off the field.

What have been your most memorable moments in your career as a cricketer?

My Test debut in 2007. To wear the baggy green and represent Australia is a huge honour and, as a cricketer, there is no better feeling. Another memorable moment was representing Australia against the West Indies in my One Day International debut, playing alongside my older brother Shane.

Your career now has many different facets. How do you organise your different roles?

I love doing a million things at once. In saying this I have a great team behind me. I have a very loving and supportive family and I have a fantastic management team who work with me and support me to gain the best results on and off the field. More importantly, we all enjoy, and get a great deal of satisfaction from, what we do.

What do you like most about playing cricket for Australia?

Cricket is my love and to be part of a highly talented and winning cricket team is a great honour – they are a great bunch of guys. However, it's not only about the players; the support staff bring such diverse ideas and skills to our team, plus the people we meet and their cultures we experience along the way. There are so many positive, diverse and enjoyable things I love about being involved in cricket.

Is there anything you don't enjoy about your job?

There is nothing in particular but I do miss my family and friends when I'm travelling. Thankfully, my family and, occasionally, my friends join me on tour.

How often do you train?

I enjoy keeping fit and I do some physical activity each day – either running, swimming or a gym session. When we are on tour and playing, the schedule is much more gruelling and demanding.

How is your work-life balance?

The next 18 months will see me spend quite a bit of time away from home but hopefully my family will join me at different stages of the tour. I will have some time off before the summer season kicks off and I will probably spend this time in and around home with my family.

What's your favourite pastime outside of cricket?

I'm an avid fisherman and I love music; there's nothing better than sitting around with my guitar and strumming out a few songs. Over the past months, I've been writing some songs with a close friend of mine with the aim of recording a full album one of these days, but for the next couple of years cricket comes first.

What do you wish someone had told you about being a professional sports player before you started out?

For me it's only ever been positive advice and feedback. I've had great mentors along the way – I've been blessed.

What qualifications do you have and how important are they in your career?

It was straight from school into cricket. I played in the Australian Under-17 and Under-19 teams and, during this time, I won a scholarship to the Australian Cricket Academy. As mentioned, I also did the retail traineeship during this period.

Cricket Australia is very conscious of the demands the media and public place on cricketers and there are ongoing programs which assist us in handling these activities. I also have a diverse range of sponsorships, and through these relationships I have the opportunity to learn about a myriad of things.

Having won the Bradman Young Cricketer of the Year Award in 2000, how does it feel to have now won the Allan Border Medal?

Following the retirement of bowling great, Glenn McGrath, I was given the opportunity to spearhead the Australian bowling attack in the 2007/2008 season. I was ready to step up and take on the role. I was fit, hungry for the role and the timing for me was perfect – given my age and 65-plus tests under my belt.

It's been a tremendous couple of years, having been awarded Man of the Series for the 2007/2008 Test series against India and the 2007 Alan McGilvray Medal by ABC radio. Then to win the 2008 Test Player of the Year and the prestigious Allan Border Medal 2008 for Cricketer of the Year was beyond any expectations.

Where to from here?

My focus is cricket for at least the next three years. However, beyond that, India holds many interests and opportunities for me including a key role in shaping a new charitable fund for Deakin India Research Institute (DIRI), part of Deakin University in India. The fund will support projects such as setting up water filtration and creating better sanitation programs which will make a difference to the lives of millions of Indians.

There may also be some opportunities in Bollywood, fashion and I'll certainly make time for songwriting and recording. As you've probably guessed, I love doing a million things at once!

Please note, this article was first published in 2010.