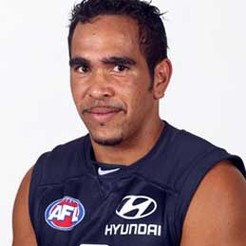 Eddie started out his sporting life as a talented soccer player, but his father introduced him to AFL at age 11 and the rest is history. He made his debut for the Carlton Football Club in Round 1, 2005. Eddie is a resounding crowd favourite and he also picked up AFL Goal of the Year in 2006.

Where are you from originally?

I was born in South Australia in Port Lincoln where Dad lived, but I shifted over to Western Australia because my mum lives in Kalgoorlie.

Did you grow up playing AFL?

No not really. I played soccer when I was little and then Dad came and put me into AFL when I was about 11. I moved to South Australia a couple of years later and played in the little league. I then moved to Melbourne to play, and ended up getting picked for the under-18s TAC Cup. I got a chance to play with the Calder Cannons for two years before getting picked up by Carlton.

What's the best part of being a pro AFL player?

Playing at the MCG. I still think that I am surprised to be playing AFL professionally.

Is it scary or exhilarating to go out in front of large crowds?

If we come up against a team like Collingwood or Essendon, it's always a big crowd. It's pretty pumped playing a game with a lot of people watching. With a big crowd and big atmosphere it's awesome   the adrenaline is just amazing.

We train basically every day except Thursday. We have meetings, weights, beach training, massages, physio – it's pretty full-on.

You obviously enjoy the game. Do you also enjoy training?

I enjoy training a lot actually. I like going to the club and seeing all my boys – it's my second home because I'm there nearly every day of the week. Most blokes don't enjoy doing pre-season training, but we have to do it and the rest of the year is good.

What support crew do you have around you?

We have a very young crew down here. The coach and the assistant coaches are easy to approach and we can talk to them about anything.

What other commitments do you have outside of training?

Every Thursday we go out to schools and talk to the kids about how to help save the environment.

How do you feel about being in the public eye?

I don't really like the media. I've never really gotten used to it.

When you get recruited into the AFL do they help you deal with that sort of thing?

When we get drafted, we spend the whole first year going through a program with media training, drugs and alcohol talks, and that sort of thing. Every player in every club has to go through the program.

Is there any extra support for Indigenous players?

A lot of the Indigenous players are doing an ambassador program at the moment to try to help young Indigenous communities. There are also Indigenous camps up in Broome. At the beginning of next year all of the Indigenous boys in the AFL, 72 of us, will go up to Darwin and get to know each other a bit more.

Do you have any plans for what you are going to do after you retire from AFL?

We try to do something now on our day off so that we have something to do after we finish AFL. I'm starting to do some work in the landscaping business.

Do you have advice for youngsters who are trying to start out in AFL?

Keep working hard and believing in yourself. If you come to Melbourne from different states you might get homesick, but you have to keep fighting and keep working hard. You'll get used to it and the boys will help you out.

Please note, this article was originally published in 2009.