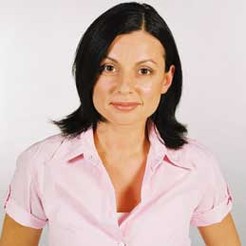 'I work in a team with very creative people who are great to work with and bounce ideas with. I'm able to work everywhere. I have an office at home, an office in the city and I work over at Channel Nine.'

Effie spent seven years working for Westpac, starting out as a graduate recruit. During this time she worked in many positions, from being a bank teller to setting interest rates on deposit products. However, she was concerned that her view of the industry was too narrow.

Effie then took a role as senior researcher, working for Paul Clitheroe on Channel Nine’s Money program. Five years later she moved over to set up and work as deputy editor of Money magazine. She has been there for nearly seven years.

How did the opportunity arise to work in TV?

I had a really good overview of the financial industry, but I only saw it through the eyes of Westpac. I was always worried that I could grow old and get the gold watch in the banking industry. Then the opportunity came along to work with Paul Clitheroe on the Money show. He wasn’t looking for a journalist, which was great because I had no background in journalism. He really wanted a financial analyst from the industry who would know the stuff inside out and translate that into TV.

What made you move into magazine journalism?

The Money show was doing really well and the idea of a magazine was always floating around, but it wasn’t until 1999 that it became a reality. When it did I thought ‘This would be great’. While TV is an effective medium to reach an audience, each story is only three or four minutes long and you can’t be very analytical. Magazines allow you to really explore the topic. So I moved over and helped set up the magazine. I was fortunate because I knew the insides of the show and they needed someone who could translate the stories into the magazine.

What aspects of the business you in particular?

I really enjoy the business side of making the magazine survive. With a brand like Money, it’s a commercial business so we do survive on ads. But at the same time, one of Money’s strengths is that we are independent. Advertisers do not sway any information that goes in Money. It’s a tough industry – Australia has so many magazines and ours is very specialised. It’s a huge challenge each month to make sure that the magazine sells.

What do you do in your current job?

My role has many different aspects. There’s the editorial side, marketing side and sales side. Primarily, I ensure that we are delivering the right stories, and fundamentally make sure that there’s integrity in those stories. At the same time, I want to make sure that the magazine is selling – or else I don’t have a job! It’s changed a lot since the day I came over and that’s why it’s been so great. These days I’m heavily involved in promoting the brand. I’ve been in the role for six or seven years and you’d be pretty bored if it was the same job all that time.

The beauty of being in this environment is that it’s very flexible. I work in a team with very creative people who are great to work with and bounce ideas with. I’m able to work everywhere. I have an office at home, an office in the city and I work over at Channel Nine.

Challenging the industry. I’m looking at everything from a consumer point of view. I like to analyse something, write about it and say to our consumers ‘Hey, we’ve looked at this and we think this is great’, or ‘Watch out for that trap’. I still get off on that.

Deadlines! Even though we’re a monthly magazine, we’re a small team and we have to get a lot out. Sometimes I don’t have the luxury of being able to do something as perfectly as I may want.

Where to from here?

I’m very happy with how my role is shaping. I get to influence what goes into the magazine and impact the magazine as a business. I also enjoy representing the magazine. But saying that, look, one day I’d like to be editor!

Want to make your mark as a reporter, editor or more? Start with a Course in Journalism – enquire today and get qualified sooner!