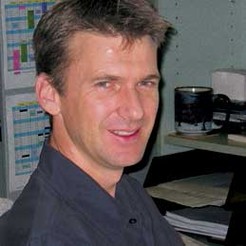 'We travel perhaps four or five times a year, really depending on the level of need. Most of our visits go directly to the National Offices in the countries where we work and we do a lot of capacity building for their own staff.'

Having grown up in Papua New Guinea, Jonathan was aware from an early age of the vulnerabilities that exist in parts of the developing world. After studying rural resource management and food security, he worked in a variety of countries before coming to Australia two years ago to take up the role of country program coordinator with World Vision in Melbourne.

His job takes him several times a year to the two countries that he coordinates the programs for – Thailand and Papua New Guinea (PNG). While his background has been in agriculture, Jonathan is now developing skills in other areas that World Vision focuses on, including human trafficking.

What sort of projects does World Vision do?

Broadly speaking, we work in three different areas – development, emergency relief and advocacy. I’m mainly concerned with the development area which can be broken up into two different types of work – special projects, which are usually just funded by governments and cover just one sector or area, and Area Development Programs, that are funded by individuals who sponsor children in a program in one country.

What does your job involve exactly?

I’m specifically looking after two countries – Thailand and Papua New Guinea, where we have national offices to coordinate all the work World Vision does in those countries.

In your job, do you get to travel much?

We travel perhaps four or five times a year, really depending on the level of need. Most of our visits go directly to the National Offices in the countries where we work and we do a lot of capacity building for their own staff. We also get the opportunity to engage with communities, listen to their stories and share their visions for the future.

How did you get into this kind of work?

I studied a Bachelors degree in rural-resources management and I used it to get into food-security and then agriculture development. I completed a Masters in international agricultural development and that’s really the entrance point into the aid program.

Are there many volunteers involved in World Vision and its project?

We rely almost totally on volunteers in the communities where we work overseas and I’d say that for every staff member that we pay, we probably have three or four volunteers who we don’t.

Have you got any advice for people on how to get started towards a career in a not-for-profit organisation?

It isn’t easy but I think the first step is to really get out there and to look at international work and the most obvious place is to look at voluntary work overseas. There’s a big difference between those who have volunteered for one or two years in a position in Vietnam as compared to those who have backpacked through the Northern part of India for six weeks. You get a whole different range of experience and different depths of experience if committed for longer periods of time. So the more experience that someone has overseas, the better. One of the best starting points is probably to look at volunteer organisations like Australian Volunteers International.

How much could someone in your position earn?

Probably half as much as they’d expect to earn. I think it really varies with experience and qualifications, such as having a Masters or a PhD, so there’s a sliding scale. I’d say between $45 000 and $65 000.

What sort of personal attributes suit people in your job?

Coming into an organisation knowing that we don’t have all the answers to all the problems is probably the best thing. Having an open mind and being able to listen. Being passionate about the solutions although not necessarily knowing the solutions yourself.