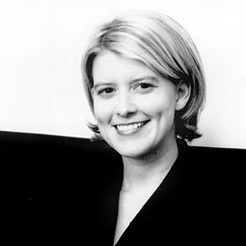 'The stroke of the pen to a piece of legislation can affect peoples lives for the better or, sometimes, for the worse.'

Natasha has broken a number of political records in her time. She started working for the Australian Democrats in her final year of university and became a Senator at 26. It made her the youngest woman ever to enter the Federal Parliament. In 1997 she became the deputy leader of the party, and she was the leader by 2001 –the youngest person to hold such a position in any party. She resigned from the position in 2002, but has maintained her work in the Senate –becoming the longest-running Democrat in the Senate. She will leave the Senate in 2008 to look after her two children and consider her future career options.

Were you interested in student politics when you were at school?

I've always been interested in politics, even as a young girl. My mum was a journalist so she encouraged discussions around the dinner table about politics and current affairs. When I was at school, I was involved in student representation, including co-founding a state-wide student representative council, which definitely led to more involvement at university.

Was that a good training ground?

In so far as there is any training ground for parliamentary politics, I think it certainly prepared me for my career as a politician. I didn't ever expect to be a capital-P politician. I always had a fascination and interest in politics and assumed I would be involved in some aspect of the law, probably in human rights law, but one thing lead to another and I was offered a job working as an adviser for the Australian Democrats in December 1991.

What did your initial work with the Democrats involve?

I got the job during my final year at the University of Adelaide where I was president of the Student's Association. I was offered a job by the then-leader of the Australian Democrats, Senator John Coulter, as an adviser on higher education and youth issues. I also did some speechwriting and worked on legislation, providing amendments and coming up with policy. That job was what really opened my eyes to the fact that lawmaking and legislation can change lives. I was pretty hooked from day one. I also worked for other senators, including the former youngest ever female senator, Senator Karen Sowada from New South Wales, and Cheryl Kernot when she became leader. I was one of Cheryl's advisers, and got a chance to do some broader policy research on issues including Indigenous affairs and women's issues.

How did you become a member of the Senate?

I had just turned 26 when I entered the Senate in 1995. I replaced John Coulter when he resigned on the grounds of ill health.

How did you find the transition to becoming a member of the Senate?

It was a massive transition. Even though I had the advantage of having worked behind the scenes, and had a reasonably good grasp of how the Parliament and Senate worked –their role and the procedures – when you actually walk into that chamber for the first time, it's quite overwhelming. The transition was more of a cultural one, in that I realised that I was the frontline person responsible for the portfolio areas. It was the theory becoming very real practice.

Did you really feel like you could make a difference?

Absolutely. I learned the power of the pen very early – the stroke of the pen to a piece of legislation can affect people's lives for the better or, sometimes, for the worse. I know that legislation I have amended as an adviser, let alone as a Senator, has actually changed people's lives, whether it was ensuring that more students and their families had access to income support or advances in the area of biotechnology. Sometimes with minor parties like the Democrats, it can take a while to make a difference, but it does eventually have an impact and it is pretty exciting to be around when that happens.

What sort of work do you do day to day?

There is no such thing as a typical day in the life of a Senator, and certainly in the life of a cross-bench, or minor party, Senator. Days in Canberra start very early, and I'm usually still in the building at midnight. Particularly in the early years, when I didn't have children, my life was spent working around the clock. It was a combination of being in the Senate during the day, voting, attending committee meetings, reading and researching, meeting with constituents, giving speeches and visiting schools – you name it, there is a broad range of responsibility. The nitty gritty of law making has been my passion, so sitting down and working through ideas for private member's bills and how to make legislation better has been a core component of my activities. And, of course, there is always campaigning. As a politician, you have to have to go out and win support and votes, and face the electorate at election time.

How have you dealt with the media's interest in you, and how has that been part of your professional life?

It was very confronting at first. When I was younger, there was a novelty factor associated with me because I was a younger woman in Parliament and it was not unusual to have to cop some quite superficial and sensationalist coverage – everything from the shoes that I wore (my infamous Doc Martins) through to the colour of my hair. I found that very difficult to deal with, but I also understood very early that, as a third party, we needed profiles and I've been really proud over the years to promote the party and its policies in media that wasn't always the usual media for politicians. I've loved making politics more accessible, particularly for young people, and occasionally that has meant doing something fun like appearing on Good News Week or doing a magazine interview. Obviously, over the years there have been differing levels of media interest. These days, the media is much more interested in my policy work.

Do you think your experience as a Senator would have been different if you'd worked with the Liberal or Labor parties?

I think it's always tougher in a smaller party. We've got minimal resources, fewer people and we often struggle to get our voice heard in the media or other forums, but I've always valued my conscience and the ability to vote according to that. In the major parties, voting for what you personally believe in is pretty much frowned upon and I don't think I ever could have voted for something I didn't believe in. When I crossed the floor to vote against the GST (deal between the Democrats and the government), it was undoubtedly the hardest political decision I have ever made. It cost me a great deal in terms of support from colleagues and future opportunities, but I would do the same again. I am also a great believer in multi-party politics. I think there is a great role, particularly in the Upper House, for parties like the Australian Democrats to ameliorate bad laws and instigate policy. There's no doubt that we work harder and do it tougher then any other politician – I'm convinced of it.

Do you think it's possible to juggle being a full-time mother and politician at the same time?

Men can do it – they can be fathers and full-time politicians, so why can't women? I'm not naive and I recognise that it can be difficult for women in any profession to juggle looking after children with work commitments. The expectations on women are still greater (albeit unfairly). It is crucial to have good support structures and that is partly the reason I've been such an advocate of paid maternity leave and improved childcare. To combine everything that I want to achieve in the Senate in the next eight weeks with around-the-clock breastfeeding is going to be difficult, but I'm up to the challenge.

Are you optimistic about the future of women in politics?

I am optimistic, but I think that change is still too slow. I know that we are celebrating that there are now more women in the Cabinet; we have an acting female Prime Minister sometimes and our first female Governor-General, but really we are just starting to catch up with other places in the world. I find it staggering that, while these bursts are taking place and we are breaking certain records, we still talk about women in terms of how they look and whether they are married and have children. These are components of interest that relate to anyone in public life, I'm sure, but there is an added scrutiny on women.

Do you think there are any myths about the profession that people should know about?

I think there is a huge difference between the perception and the reality of the work we do in Parliament on a daily basis. People look at the television news and see the theatrics of question time. They often feel quite disillusioned and cynical about it – often with good reason – but that is only one hour of one day. We actually get along quite well a lot of the time across political boundaries. We will sit in committees and there will be a consensual debate about politics, policies, amendments and legislation – it can be incredibly satisfying and exciting. It's not always that gamesmanship that you see in the media and if people are heading to politics because they like those theatrics, then it's not the profession for them. Apart from that, the perception that politics is tough is very true, but it doesn't mean you shouldn't be a part of it.

What type of person suits a career in politics?

I'm a huge advocate for different types of people from different backgrounds getting into politics. Younger people, older people, people with disabilities, rural, regional, Indigenous and women – whatever it may be – because Parliament is only improved by diversity and difference being reflected.

What practical advice do you have for people getting involved?

I think you have to decide whether you really enjoy politics. What I always say to young people, particularly school students, is to come and do work experience in my office and see what you think. After a few days or a week, some people decide they love it and that's what they want to do and others realise that politics was nothing like what they thought – they thought it was easier or more glamorous. Put your toe in the water and see what you think of politics behind the scenes. If you know it's for you, go and speak to your local member or join a political party. Decide what policies you are interested in and have a look at what different parties believe in. If you are just interested in power, than joining the major parties is probably a good way to go, but if you are interested in ideas and principles and you don't think you could join a political party with which you don't agree entirely then look at the other minor parties – the Democrats, the Greens or even consider being an independent. You've got a long way to go between joining a party and getting preselected, but make those initial steps and you will find mentors and colleagues who will help you.

If a career in Government is your calling then don't delay – enquire now about our courses!

Please note, this article was originally published in 2010.