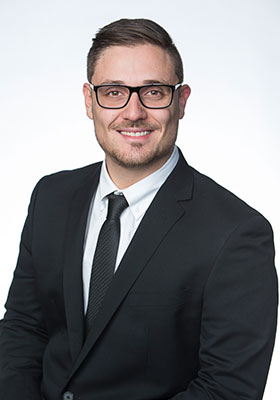 Between the abundance of ‘URGENT’ emails and dashes to the District Court, a 14-hour working day is not uncommon in Pandelis’ world as a sole trading barrister.

How long have you been in law?

Admitted as a Solicitor in October 2013 and in practice since.

Bachelor Law & Commerce (International Business) at the University of New South Wales for five years. I followed this with a Graduate Diploma in Legal Practice at the College of Law for six months. Obtained a distinction in the NSW Bar Examinations in June 2016. and completed the Bar Practice Course in May 2017. Finally, I became a barrister in June 2017.

When did you first know you wanted to be in law?

Probably around the age of 16 when I realised that I could get paid for arguing with people.

I arrive at Second Floor Wentworth Chambers roughly 7:00 am. Sort through and respond to about 50 emails all with the subject line “URGENT”.

Around 9:00 am, I take a call from my Clerk. She’ll notify me that there’s an “URGENT” application down at the District Court. I’m handed a half page affidavit and given a 30 second rundown of what the matter is about.

I’ll then run down Elizabeth Street and head up to Level 16, John Maddison Tower. This is where the fun starts. For the next two or so hours, I’ll be on my feet trying to do the very best that I can to get the orders sought by my instructing solicitors.

After I’ve successfully obtained the orders (on most occasions), I’ll walk back down Elizabeth Street to Second Floor Wentworth Chambers responding to another 50 or so emails marked “URGENT” on the way.

When I return to chambers, I’ll send a reporting email to my instructing solicitors, enjoy my home cooked lunch in front of my computer and start working on all the advice work that has built up over the past 2 weeks.

Around 8:30 pm, I’ll receive a phone call from my partner who has presumed that I’ve been kidnapped after not responding to her 20 or so SMS messages also marked “URGENT”.

Around 9:00 pm, I’ll head home on the train and play some Pokemon GO! on the way.

Be courageous. Be concise. Get to the point.

What do you wish someone had told you before starting in this industry?

The importance of getting as much experience as early as possible – even if it means working on an unpaid basis.

Running a final hearing in the Local Court of New South Wales with less than a day preparation.

Tell us about yourself outside the courtroom

Think a career in law is right for you? Explore our courses in law and make an enquiry today!