Sarah Key – Physiotherapist to the Queen 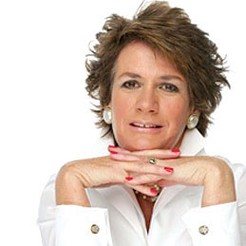 Sarah trained as a physiotherapist in Australia before jetting off to London and learning from the best in the business. She established such a strong reputation that the British Royal Family became clients in 1983. She has since become a tour de force in the profession and currently practises in both countries, teaches postgraduate physiotherapy, has established a retreat for back pain sufferers and has written a number of books, including the bestselling Back Sufferer's Bible.

How and why did you get into physiotherapy?

I could see that it was not done very well and I had always been interested in back problems. My mother suffered appalling migraines which caused spots in front of her eyes when she was driving and all sorts of things. She tried everything, including changing her diet and giving up chocolate and coffee, and looked everywhere for the magic cure. She eventually got relief with osteopathy, which I became interested in. However, I opted for physiotherapy because it was a more recognised form of treatment at the time. I did the diploma course, which is now a degree course, and graduated in 1970.

What direction did you then head in?

I knew who the physiotherapy gurus were in London and I made a point of going to their hospitals and training with them. They were very enlightened people, but were mainly closeted away modestly dealing with people who had bad backs. I also just followed my instincts, read widely and tinkered around with patients with the book opened at the right page.

Was it a gradual process to become the physio you are today?

Yes, and I'm still learning and reading. In 2003, I started teaching postgraduate physio here and in the United Kingdom, which involved me going back to the books and researching papers and data. Therapy seemed to me to be very adhoc and I wanted to get more involved in research to give more form and underpinning to what it is all about. The classes have really been an enlightening experience for me and have really brought my knowledge right up.

I think when you get a bit older, you get less worried about what people say and you are more prepared to stand up.

Do you think physios need to have innate talent?

Yes. I've been criticised lately for saying that the choice of physios has been too keyed into their tertiary entrance ranking. Physios need to be very proactive, practical, hands on and energetic since they need to swing into action quickly. You've got people traipsing in from all points on the compass nursing their pain and wanting someone to roll their sleeves up and do something. You've got to be confident without being glib, you can't be retiring and you must be on the front foot.

Do you teach your students a slightly different method to what is usually taught in universities?

Yes I do. The 'Sarah Key Method' sees the core condition of back problems – and the pathology from which other more complex conditions can flow – as a deficiency of nutrition to the intervertebral discs. The IVDs are very big structures with no blood supply, acting as tensile links and shock absorbers in the spine. As such, their role is onerous and discs break down faster than any other tissue in the human body. The therapy I use is all about encouraging and maintaining a better nutrient supply and increased water traffic through these disks so that the veterbrates stay strong and are cushioned by a properly water-filled pillow.

How have you come up against traditionalists?

I have always felt a cool wind of exclusion from the profession, but I guess anybody who says something against the grain will always be received with caution. I hear about it more indirectly, although with the advent of my various books, there has been a resounding deafening silence. It's very easy to keep your head down and share a collective opinion, but because the pandemic of back pain has been handled so badly, you get to a point in your professional career where you have to decide whether you are going to open your mouth and do something about it. I think when you get a bit older, you get less worried about what people say and you are more prepared to stand up.

How much of your career has been spent working as a physio doing the day-to-day work and how much has been going above and beyond that?

Up until I started teaching Master's students, I was really at the coalface every day. Now I run other things to create some variety. For example, I run intensive therapy sessions at my country property in New South Wales and also at a boutique hotel on the Cornish coast in the UK. We have five days of intensive program, when each day patients have intensive one-to-one treatment with me, spinal decompression exercise classes, information sessions on spinal biomechanics, physiology and pathology and massage. It really gives people a good chance of fixing their back. That's been something that I've brought in to push me out of my own comfort zone and to do what I love doing but in a different way. I also spend a lot of my time writing and I'm travelling all the time.

How did you get involved with treating the Royal Family?

The Royal Family had heard about me by reputation. When it came to getting the job done, I guess I was not completely overawed by the class and status thing and I think they responded to my straight talking and felt I got to grips with the problem. I started treating the Queen in 1983, so I've been treating the Royal Family for 25 years.

Is it fairly daunting having the Royal Family as clients?

Not really. They are very normal and they love straight-talking Aussies. They like results and for people to roll their sleeves up, get in and do it, and not be daunted by other silly issues.

What have you enjoyed most about your career?

I really love being in contact with my fellow human beings. When people are in pain they are very real, honest and tender, and that's a lovely way to be with people. It means I hardly bother with social activities at all because they are often the opposite of that. For me, a cocktail party is the living end! Just so much frippery that I can't be bothered. But I think that being with people and finding the most unlikely qualities is something that is very apparent when patients come along. They are like children and I feel like a universal and eternal 'parent'. It's all about compassion and being involved with the person – not being involved in a money-making enterprise. It's about giving people time and privacy and the licence to be themselves and tell their story.

What are the worst bits?

What are your further career aspirations?

My books, including my bestselling book the Back Sufferers' Bible, have sold incredibly well throughout the world. They are written to the layman and that's great because I really want to speak to the patient, but by the same token I also realise that I have a compunction to spread the 'Sarah Key Method' throughout the profession. To do this, I actually have to virtually rewrite the Back Sufferers' Bible as a textbook. The data, research and concept is there, and the body of work is written, so basically all I have to do is reference the work of previous researchers who provide the evidence-base for my work.

Any advice for someone who was thinking about a career in physiotherapy?

Don't just do it because you're brainy. Do it because you're proactive and compassionate. There are lots of other things you can do if you're just clever – physiotherapy isn't really for boffins. Physios have more of a chance to architect their own working circumstances than most people. If you have your own setup, you have a lot of freedom and I really value that. I always suggest that people try and capture that for themselves.

Interested in a career in physiotherapy? Check our Courses in Health and enquire today!