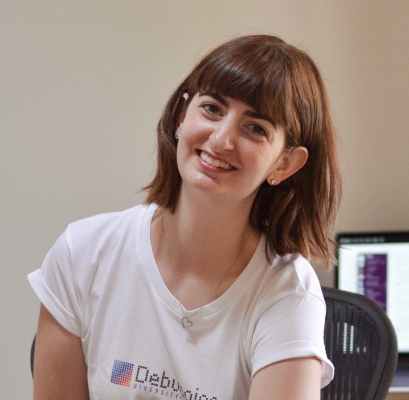 Taryn is an ex-Pastry Chef turned Software Engineer who has just joined the team at Atlassian, an Australian enterprise software multinational that develops products for software development, project management, and content management. She is passionate about inclusion, accessibility and improving user experiences for all.

What organisation are you currently working for?

What is your current job title and how long have you had this role?

Two and a half years ago I was actually a pastry chef specialising in handmade confectionery but then I enrolled in a 3 month Web Development Immersive bootcamp with General Assembly. I began my first role in tech as a Junior Front-End Web Developer just two weeks after completing the course. A year later I was promoted to Software Engineer.

I had taught myself to write HTML & CSS as a child but never thought I could have a career in technology. I didn’t feel like I fit into the stereotype of a computer programmer. It was only a decade after high school that I finally realised I could actually learn programming and that I could do it as a career! It was the best decision I’ve ever made.

For the most part, I had no idea. I had so many different interests it was really hard to narrow it down to just one career. For a while my dream job was to be a receptionist – it was the only job I knew of at the time that women did with computers! Coincidentally, I did end up working in an administration role for four years.

I went with the classic first job and worked at McDonald’s for a few years starting when I was 17.

Tell us a little more about your role and explain a typical day on the job
This is a tricky question to answer because I’ve only just started my latest role and am still on-boarding!

In my last role, I was mainly working with my team to code page templates and reusable components that were used across the company’s website. One project my team undertook was to redesign the whole site, updating thousands of pages to new templates that we had designed and built. It was a huge achievement!

A typical day on the job usually begins with a morning standup meeting to check in with the team and see who’s working on what that day, what was achieved the day before, and if anyone requires any help. It may include additional meetings with the team, such as planning sessions to discuss what we’ll be working on next or even social catch-ups which are so important for team culture in this time of remote working. In between these meetings is time for building features, fixing bugs, maintaining old code, writing documentation, knowledge sharing with team members, or even studying to upskill! While there’s a lot of coding involved in the job, the impact you’ll have as a Software Engineer definitely goes beyond the code you write.

The best part is that it’s always challenging. I can never get bored because there’s always something new to learn. The worst part is that there’s always something new to learn! It can definitely feel overwhelming at times and “imposter syndrome” is felt by almost everyone in the industry! You definitely have to get comfortable with not knowing everything, but being confident that you can find out.

Stop doubting yourself and remember that you deserve to be here as much as anyone else.

What do you wish someone had told you before going into tech?

I wish someone had told me that almost everyone feels like they don’t belong, aren’t smart enough, or have somehow tricked people into thinking they can do this job. It also doesn’t matter what level you’re at, whether you’re just starting out, are senior level, or the CTO. Almost everyone feels imposter syndrome at times.

What advice would you give someone wanting to become a Software Engineer?

Get comfortable with failure. You will fail on a daily basis, and then you’ll try and try again until you figure it out (and you are definitely capable of figuring it out).

What qualities and skills should people have if they want to go down this career path?

A love of learning and stubbornness to not give up. It’s a career that can be incredibly rewarding, but it’s also very challenging. You can never know everything so you really need to be okay with that and love the constant learning process. You’ll also make plenty of mistakes which is normal. If you’re not making mistakes, you’re not pushing yourself and not growing. Some days you’ll want to give up completely, but you need to be stubborn enough (or calm enough perhaps) to come back and try again.

Where do people have to start to get into Web Development?

The best part of web development or software engineering is that there are many paths you can take to get your foot in the door. You can go to University, TAFE, complete a coding bootcamp, or even learn by yourself entirely online. There are still some roles that will require a Computer Science degree, but for most it’s about your skills and what you know, not what’s on a piece of paper.

Something I’m really proud of was proposing and implementing a set of web accessibility standards for my last engineering team to follow. Web accessibility refers to the inclusive practice of removing barriers that prevent interaction or access to websites, by people with disabilities. Basically it just means making the web available to everyone. It’s something I feel very strongly about and having standards in place is a great first step in improving the accessibility of a website.

I’m incredibly excited to have just started a new role at Atlassian, a company I’ve always admired. It’s a dream come true! So my goal at the moment is to make the most of this opportunity and learn as much as possible from the talented people around me!