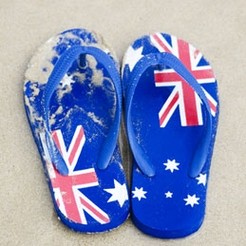 Australians have a colourful way with language and are notorious for abbreviating words and creating new phrases and expressions. Many of them are ingrained in Australia’s history and have become a part of the everyday language. Here are a few you may hear when you make your way Down Under.

Agro (Ag-grow): the state of being angry or aggressive.

Ambo (Am-boh): is an abbreviation of ambulance. Can also refer to an ambulance driver paramedic.

Barbie (Bar-bee): abbreviation of ‘barbecue’, which refers to the apparatus used to cook outside. It is a popular way to get together with friends, especially in the warmer weather.

Battler (Battel-a): refers to someone who constantly works hard but always struggles to get by.

Beaut, beauty (Be-ute, be-ute-ee): is used to describe when something is very good, desirable or agreeable.

Bee's knees (Beez neez): is used to describe when something is the absolute best of its kind.

Big smoke, the: refers to the major cities of Australia, i.e. Sydney and Melbourne.

Blowie (Blow-y): is an abbreviation of blowfly and refers to a very large and noisy fly.

Boot: when used in reference to a car, this means the trunk of the car.

Blue (Bl-ew): to have a fight or an argument with someone.

Buckley's, Buckley's chance (Buck-lees): to have no luck or no chance of reaching a particular outcome.

Chook (Choo-k): refers to a chicken.

Chrissie (Chris-see): is an abbreviation for Christmas.

Cods wallop! (kods woll-op): an exclamation that signifies that one does not believe what has just been said.

Cuppa (Cup-pa): this is an abbreviation for ‘a cup of tea or coffee’.

Dag: bits of manure that stick to the wool around a sheep’s bottom. It is used as a term of endearment to describe someone who is generally nerdy, goofy and not trendy.

Dingbat: used to describe a silly, foolish or childish person.

Dog’s breakfast: is used to describe when something is a mess, or a complete failure.

Duffer (Duff-a): is used to describe someone who is silly.

Dunny (Dun-nee): refers to a toilet or lavatory.

Elbow grease: used to describe exerting effort or putting in a lot of energy to get something done.

Esky (Ess-kee): a portable container that is used to carry and keep food and drink cool. It is short for its proper name Eskimo box.

Exy (Ex-see): an abbreviation of expensive.

Footy (Foot-tee): is an abbreviation of ‘football’ or rugby.

G’day (Gidday): a shortened form of ‘good day’, this is a greeting that typically means ‘hello’. It is used informally.

Grouse (G-rouse): is used to indicate that something is very good or excellent.

Larrikin (Larry-kin): is someone who is always having fun, telling jokes and playing pranks.

Mate (M-ait): a mate is another word for ‘friend’. However in Australia, strangers can address each other as mate.

Porky (Poor-kee): is an abbreviation of ‘pork pie’. It is another word for a lie or an untruth.

Rellie or relo (Rell-ee, rell-oh): an abbreviation for relative, meaning someone who is blood related or considered a part of the family.

Shout (Sh-out): to buy a round of drinks at the pub for all the people in your group. Each person will take turns in ‘shouting’ the others.

Sickie (Sik-ee): taking a day off work, by feigning sickness. Can also be taken for genuine reasons.

Smoko (Smo-ko): refers to a 5–10 minute break, traditionally taken to smoke a cigarette. Can also be used to refer to a tea break.

Strewth! (Stru-th): is an exclamation, can be used as a mild oath to express surprise, shock or to place emphasis.

Squizz (Skwizz): to have a look.

Swag: bedding that rolls up and is popular for camping.

Ta (tah): an informal way of saying thank you.

Walkabout (Walk-about): to travel around the Outback for an indefinite amount of time. Can also be used to describe something as lost or gone.

Have a burl, have a crack, have a go: to try something that appears difficult or foreign.

Kangaroos loose in the top paddock: coming across as crazy or lacking intelligence.

Mate's rate, mate's discount: a discount on a product or a service reserved for a ‘friend’.

Happy as a pig in mud: To be very happy.

Call it a day: to stop working and finish up for the day.

Call it quits: to finish something on a permanent basis, regardless of whether it is finished or not.

Chew the fat: to have a long and enjoyable conversation with someone.

Chuck a wobbly, chuck a spaz: to throw a fit or a temper, an act of anger.

I'm easy: not having a preference of options, not fussed or worried.

In the bag: to be sure that the outcome will be in your favour.