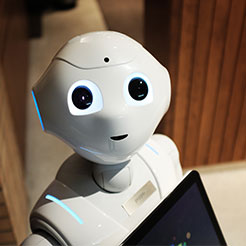 AI: Does it Mean Boom or Doom for Your Career?

The times they are a changing and the advancements in automation and artificial intelligence are reshaping our world! There has been lots of buzz around the role of Artificial Intelligence (AI) – how far it has come, where it’ll go and most importantly, what will it mean for our careers?

Many of us often assume that a step forward in technology will mean a boost in productivity and efficiency, but do you ever stop and think what these changes might mean for our job?

Automation is already a strong part of our local workforce, from driverless trucks in mining fields to robots on docks and machines in agriculture fields. AI has most definitely arrived!

Put simply, artificial intelligence is a computer that can do the intelligent tasks that us humans do. “An intelligent computer system could be as simple as a program that plays chess or as complex as a driverless car,” Mary-Anne Williams, professor of social robotics at the University of Technology, Sydney.

The AI industry is projected to be worth a whopping $70 billion by 2020 with many hailing the next two decades as the Era of Artificial Intelligence. A seminal study led by Oxford academics Carl Benedikt Frey and Michael A. Osborne, titled The Future of Employment: How susceptible are jobs to computerisation? has found that within the next 20 years, a whopping 47% of jobs will be lost to robots, which indicates that the AI revolution could mean one of the biggest shifts in employment history!

New research by the McKinsey Global Institute suggests that while this increase in automation can generate enough work for everyone, serious challenges are presented in how we manage the transition. Between 3-14% of the global workforce (that’s up to 375 million workers), may need to switch jobs or acquire new skills by 2030, depending on how fast automation comes into play.

Economist, Andrew Charlton has analysed the entire Australian workforce and says that automation will soon impact all workers, “it will hit everyone, and everyone’s jobs will change!” He continues to explain, that white-collar workers will be more affected, especially those in middle to high-income brackets.

According to a recent Future of Work Forum hosted by FOW, the five industries most likely to be impacted by artificial intelligence in the next 10 years are healthcare, manufacturing, transportation, customer service and finance.

The more sophisticated computers become, then the more sophisticated the work they complete becomes. So if you feel your job is under threat of automation, it’s important to ramp up your soft skills! Things like great communication, leadership, creativity and interpersonal skills are areas that a robot simply cannot compete with.

When it comes time to refresh your skills and qualifications to meet the AI demand, ensure your new skills will take you far into the future. Charlton’s research shows that up to 60% of studying Australians are preparing for jobs that are very likely to be automated within the next 30 years. So your best bet is to future proof – turn your focus onto what AI cannot do. There are roles out there that need a human touch, interaction and real emotion. Industries that are most immune to AI include nursing, midwifery, allied health (professionals like occupational therapists, podiatrists, dentists etc) hospitality, advertising, design, teaching, psychology and community services.

Futurist Martin Fort says “the best thing you can do as a worker is to make sure you’re not doing something routine, repetitive and predictable… move into other areas that involve working more with people and being creative.”

It almost goes without saying that another great place to be is IT or ICT (Information and Communications Technology). According to a report by Australia’s Digital Pulse, “Australia’s digital economy is expected to grow significantly over the coming years. This growth will be fuelled by new waves of technological developments” the report continues to say that the demand for ICT workers is predicted to increase.

In the coming 20 years over 5 million Australian jobs are at risk of being disrupted by technology, but don’t fear, this doesn’t mean you’ll be out of a job, but it does mean you’ll likely have to train for a new one. History shows that when jobs are lost in certain fields because of technology, new ones are created in other sectors. In the 60s when teller machines were introduced at bank branches, people panicked and thought it meant the end of humans working in banks, however, employment in banks grew as staff were placed in new areas like mortgage lending and insurance. These same trends may play out again! Charlton explains how “we have to work really hard to ensure that workers who are displaced by automation are reskilled, retrained and are given new opportunities in different areas.”

Want to know how at risk your job is of a robot takeover? BBC has created this nifty tool based on research by Oxford University and Deloitte that calculates your likelihood.

While the evolution of automation can sound a little scary to some, it’ll mean a lot of great things across many areas. Some AI awesomeness includes:

Workplace injuries are estimated to fall by 11% as automation will eliminate some of the most dangerous physical tasks in the economy.

AI will be taking over the more mundane tasks, leaving more space for creative, social and complex tasks to us!

By automating routine tasks is said to improve job satisfaction for 62% of low-skilled workers.

AI could boost the Australian economy by over $2 trillion by 2030!

Automation is well and truly upon us and is showing no sign of slowing down, so it’s more important than ever to safeguard your career and future-proof your skills!