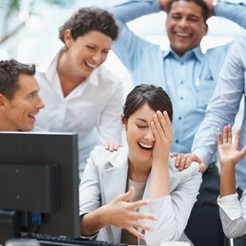 A recent survey has revealed that Australians are busy social networkers, with more than 70 per cent of Australian workers engaging in social media. We have the highest global average for time spent on social media each month.

Employer attempts to block social media sites are largely ineffectual, as anyone with a smartphone knows.

Social networking is well on its way to becoming the primary means of communication – by 2014 it will overtake email as people’s main method of contact. With 250 million people logging onto Facebook every day, it’s hardly realistic to expect people to turn off as soon as they walk into the office.

Social media use at work is an entrenched – and in some cases expected – part of business culture. Fewer employers are banning social media at work as it is seen by many to be a normal part of daily life and interaction. However, more and more organisations are implementing formal social media policies to contain its use within reasonable limits.

The risks of social media to business

According to Aon’s Australasian Risk Management Benchmarking Survey, social media is a key potential risk to a business’s ‘brand and image’ – identified as the most important risk concern for Australian companies.

There have already been numerous examples of how damaging negative social media press can be to a company’s image – as well as its bottom line. Vodafone’s battering at the thumbs of Twitter have been widely reported, and Qantas’ share price plummeted following widespread but incorrect social media posts claiming that a Qantas plane had crashed.

With the power to share negative customer experiences through tweets, status updates and blogs in the blink of an eye, social media has businesses running scared. Companies can also suffer at the hands of their own employees when they post inappropriate material online or badmouth their employer – and so the risks multiply.

Even more alarmingly, seven per cent of Australian workers have had their identity stolen through a social networking site, perhaps as a direct result of risky online behaviour or poor identity protection.

Social networking sites make a person particularly vulnerable to Trojans, viruses and malware that can compromise web accounts or even take control of your computer. If done at work, hackers can gain access to internal data or access web application accounts.

Many employees engage in risky online behaviour, knowingly or unwittingly. Twenty per cent of those surveyed had posted confidential information on a social networking site and 25 per cent had accepted a friend or follower request from someone they didn’t know, giving total strangers access to private information.

‘Internet users can help ensure the attempts of cybercriminals are futile by following some simple steps, such as increasing privacy settings, restricting the amount of confidential information posted online, and using strong passwords and security software, to keep their information and identities secure,’ advises Martin.

When do you do your social networking? Let us know in the comments section below.