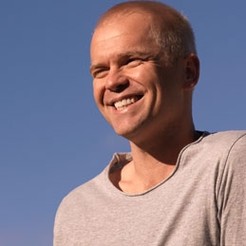 'It was the 70s in Melbourne so I made all the retro stuff like chocolate mousse.'

Bill grew up in Melbourne with a father who was a butcher and a mother who was a vegetarian. Becoming a chef was never on the childhood career plan, but he taught himself to cook through reading, eating and experimenting.

Bill is now Australia’s answer to Jamie Oliver, with three restaurants, a range of cookbooks, regular contributions to magazines, his own television show and a regular radio segment.

Where and when did you learn how to cook?

For me it was a bit of a necessity since Mum was never a very good or interested cook. But the thing I enjoyed most about it was the creative aspect – I had fun doing it. I always loved recipe books and I would buy myself the Women’s Weekly books and recipe cards. It was the 70s in Melbourne so I made all the retro stuff like chocolate mousse.

You came to Sydney as an art student. What turned your career path towards being a chef?

I started off studying architecture at RMIT in Melbourne, but hated the structure and discipline of it. I was always more drawn to creative things and my interests and talents lay more in the humanity side of things. I came to Sydney for a weekend, loved it, and applied to art school even though I had never thought of it as an option before. I got into the University of New South Wales College of Fine Arts. That changed everything for me. It really loosened me up and opened a way of thinking that was really new to me.

Did you ever think of becoming a chef before you came to Sydney?

Never, really, no. When I was younger, being a chef was more like a trade – there weren’t very many famous chefs. I knew I liked cooking and I was good at it, but I never really thought of it as a career. When I was at art school, I was working at a restaurant part time and just loved it. Art by nature is a very solitary practice and I loved the collaborative effort of a restaurant – the fun of working with people.

You set up your first restaurant when you were 22. How did you have the business knowledge to embark on such a venture?

My father and grandfathers were all small business owners, so having a business is part of my make-up. I was born in the back of my dad’s butcher shop and lived there for the first three years of my life, so having a shop was never such a daunting thing for me. Having a restaurant is basically just a glorified shop.

Once you opened the restaurant, how did your career branch out into all the different paths that you are involved with now?

After I opened the restaurant in 1993, we had a lot of media attention from magazines and I wrote recipes for people who wanted to know how to cook the food from the cafe. Then I was asked to do a book, so I did my first cookbook – Bills Sydney Food. It was the time when Jamie Oliver was getting big and there was a lot of interest in food. I’ve been lucky enough to be approached by TV stations and various media companies to contribute to different projects, and my wife is a television producer so we also decided to produce our own show.

Has your career evolved naturally or is it something that you planned?

No, there is no plan at all. Someone told me when I was younger that whatever you do, do a good job and it will lead somewhere else. That’s the best advice I have ever had. Also try to help your boss – I think that’s an underestimated thing. If you help the person above you, people really notice and appreciate it and other things will open up for you.

Day-to-day life changes all the time and that’s the most exciting part about my life. The worst thing about just having a restaurant is that it is the same every day – it’s very repetitive, you have to make the same food. For someone like me who hasn’t got a very long attention span, it took real discipline to do that. Now I have such a great variety in my life. Yesterday I took the chefs from the restaurant around the markets, bought some things and took them back to the office to experiment with recipes. There are always lots of meetings, a lot of running around and a bit of travel because I have a restaurant in Japan now.

Tell us about life outside of the kitchen…

My favourite thing to do is nothing. And spend time with my children – I think I appreciate that now more than ever. What I miss is being able to have a quiet coffee and read the paper, but having a very busy work and family life means that has been left behind. But there’s plenty of time for that when I’m old.

What advice do you have for someone wanting to have a similar multi-faceted career to you?

To start with, you need to learn how to cook. So get to a restaurant and learn how to cook professionally. I have had a lot of people start working for me who then go off to do other things. Whether it’s starting restaurants, being a recipe tester or working as a food stylist.

Is cooking an innate talent or something you can just learn?

I think the best people just have a natural flair for it. It’s not hard, but people who are naturally talented at cooking love doing it and it’s their relaxation. You can’t fake that passion.

Please note, this article was originally published in 2010.