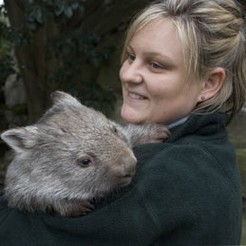 'I worked at Taronga Zoo as a volunteer when I was much younger and did work experience here. The fact that I get to work with animals every day is fantastic.'

Caroline obtained a degree with Honours in Zoology before going on to work as a school science teacher for ten years. She then went back to her first love and now works at Sydney’s Taronga Zoo – teaching children about animals and their environments, including environmental education and conservation. Caroline revealed some of the options of pursuing zoology careers for people who are interested in working with animals.

What do you do in your day-to-day job?

I do a variety of different jobs and activities. I am a member of a team of eight teachers at Taronga’s Education Department and in my main program I coordinate the Schools Zoomobile. The Zoomobile visits about 13 regional areas within NSW every year as well as lots of schools in the Sydney metro area.

FYI The Taronga Zoomobile is an outreach program that gives students who have difficulty coming to the zoo a chance to meet, learn about and interact with native wildlife.

Being part of a bigger team gives me the opportunity to work on other programs with local schools and teach classes here at the zoo. We see roughly 150 000 students a year. A range of interactive workshops are offered at the zoo for the school curriculum from Kindergarten to Year 12 and tertiary level. Students can either come through the zoo as a self-guided excursion with teachers, or with a workshop included where the students get the chance to interact with at least five live animals including reptiles, mammals and amphibians. The team works with many schools doing project-based learning units on current conservation and in situ (habitat-based) programs occurring at the zoo.

FYI In situ is a Latin phrase meaning ‘in the place’ and refers to working with animals in their natural habitat. Ex situ is ‘off-site conservation’ such as wildlife programs in zoos.

What do you teach the students?

The role of the zoo is always evolving, the focus has moved from menageries to eco museums to biogeographical exhibits. Conservation and education are the key focus now which is represented through all workshops at the zoo. The workshops or project-based learning activities at the zoo have clear conservation messages integrated into knowledge, understanding and skills within the school curriculum.

What do you enjoy about your job?

The fact that I get to work with animals every day is fantastic. In a typical lesson in the Zoomobile, I will show at least six animals to the students, which they can interact with – including a snake, possum, frog, echidna, lizard, young crocodile, cockatoo and Tawny Frogmouth. It is powerful to actually see the kids change their attitudes and come away with positive conservation actions. Being able to combine environmental education with my passion, which is zoology, is just a dream for me.

What other animals do you work with?

We use a lot of Australian animals. All the animals at the Education Centre are usually rescued by the public and brought to the Taronga Wildlife Hospital or confiscated animals from Customs which can not be released back into the wild. Teaching an adaptations lesson may involve a close-up interaction with a Bearded Dragon and Shingleback Lizard to compare their adaptations and suitability to the environments they live in.

How do the kids react to the animals?

Students today have little experience with live animals, particularly students who live in urban areas. They seem to be unconnected to even their local areas and the uniqueness of Australian native fauna.

At first, most students are petrified of any animal due to a lack of connectedness to the environment.

What’s the funniest thing an animal has done when you’ve been showing it to students?

Going to the toilet always gets a laugh. If an animal does seem ‘funny’ or unsettled it is usually a sign of stress and the animal will be placed back into its enclosure.

What are some other jobs available at the zoo?

Zookeeping is the obvious one, but we have 300 people who work here in all sorts of capacities – from exhibit planning, research scientists, sponsorship and fundraising, to media and public relations (PR).

What did you do before you became an education adviser?

I worked at Taronga as a volunteer when I was much younger and did work experience here. I always knew that I would like to work in this field, but it’s quite competitive – becoming a zookeeper involves years of volunteering and casual keeping before becoming permanent.

I have an interest in education so decided to train as a high school science teacher and hoped to eventually combine education with flora and fauna with an interactive element. I have worked as a science teacher in London and Sydney since 1997.

What did your degree in zoology entail?

When I studied zoology at university the focus was very much on fauna taxonomic groups and behaviours. I did some entomology courses looking at insects as well as some courses on genetics and animal behaviour. I did my thesis on the reproductive behaviour of dragonflies.

Do you need a Zoology Degree to become a zookeeper?

Not at all. A lot of zookeepers do have a Zoology degree or some kind of biology background, but it is acceptable to just have a Certificate III in Captive Animals which you can do through the Taronga Training Institute. Volunteer work is always helpful.

So, what are your future career aspirations?

I love my job as it is, but I would absolutely love to be able to interact more with schools at a teacher level and also to get teachers more engaged with sustainable education. I don’t think environmental education is addressed enough in the curriculum as it is.

What advice would you give to someone interested in moving into this field?

You really have to work for it. Working as a volunteer in a zoological organisation is very important to get your foot in door. Here at Taronga Zoo, you can become a discovery host where you interact with the public and handle animals. There is also an excellent program called YATZ (Youth at the Zoo) for 14 to 19 year olds, which allows kids to come in and get a bit of experience to get a feel for what zookeeping is like. You have to be aware that you aren’t necessarily going to come into a zoo situation and be able to just cuddle animals all the time. It’s more about conservation, research and education.

Turn your love for animals into a dream career just like Caroline! Start by checking out our Courses in Animal Care.