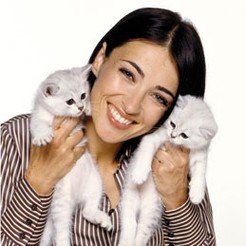 'I’ve been bitten, kicked and hissed at. I’ve been chased out of paddocks by llamas spitting at me and strangled by snakes.'

Dr Katrina combined her love of animals with a career in the media to become one of Australia’s most successful television vets. Working on Totally Wild and Harry’s Practice, Katrina has had plenty of rewarding experiences during her mission to teach Australians about positive pet ownership.

Why did you first decide to become a vet?

I’ve wanted to work with animals for as long as I can remember. I went to James Ruse Agricultural High School in Sydney and it had a farm where I used to spend all my spare time. Before school and after school, I would be down on the farm with the cows and the horses – it was crazy. It was just a natural progression for me to do something that involved animals.

When did you start thinking about combining your love of animals with a career in media?

I got halfway through the vet course at university and I realised that there’s a lot about being a vet which I wasn’t very well suited to, like putting animals to sleep. It’s an amazing career and there are wonderful opportunities, but I realised I could do a better job if I focused on teaching people the best way to care for their pets.

What was your first step into the media?

After graduating from vet school, I sent my resume around to a pile of places in the media and I got a job as a researcher on the children’s television show Totally Wild. It involved researching any animal story I wanted anywhere around the country. It could be anything from a tiger cub born in a zoo, to a wildlife park to guide dog puppies. Then they gave me a job one day a week as a reporter and it grew from there.

Did you have any media training or experience prior to that?

I was lucky because I did a lot of modelling and TV jobs to pay for my university degree, so I had a little media experience. When I started on Totally Wild I had to research, write and produce my own stories so I just tried to learn from anyone in the building.

What experiences did you have on Totally Wild?

At that point in my life, it was the best career opportunity I could have had. I got to learn everything about the media, play with animals every day and get paid for it. One of the highlights on that show was when I chose my puppy, Toby, on television. We followed all the steps of his puppyhood and it was fun to have Toby as part of the team.

What was your next move?

I then got approached by Channel 7 to work on Harry’s Practice. That was a prime-time television show so there was a lot more money spent on it, higher production quality and I got to work with Dr Harry, who really was a role model for me. I had producers who were writing the scripts so I could focus more on presenting. It was an amazing opportunity – I was spreading the positive messages of pet ownership and having a great time doing it.

What are the bad bits about the job?

The hours are long and unpredictable and we would often travel a long way just to shoot for a day, but there weren’t really many disadvantages.

What are you working on now?

Since Harry’s Practice ended I have been doing various media. I miss having a particular show because it was nice having that security and grounding. I’ve just finished the second series of a show called, Housecat Housecall in the US, which is all about solving cat behaviour problems, and I have a little girl now so I spend a lot of time with her.

There’s a saying ‘never work with children or animals’. What sort of experiences have you had?

Many, many, many. I love that animals are unpredictable. I’ve been bitten, kicked and hissed at. I’ve been chased out of paddocks by llamas spitting at me and strangled by snakes.

What advice do you have for someone following in your footsteps? Do you think it’s imperative to have a veterinary qualification?

The media can be so fickle. I’m very fortunate to have a degree because it’s something to fall back on and base my credibility on. That’s really important because the industry does chew people up and spit them out. Don’t put all your eggs in one basket – focus on what you want to achieve, but be sensible about it and have a backup.

Do you think there are many opportunities out there to do the work you are doing?

There are fewer opportunities than when I started out, because for a while there were a lot of lifestyle and information shows, whereas now it’s very reality driven. Things go in cycles and you can’t tell when the next cycle will be.

Want to make a career out of playing with your favourite furry friends? Sounds like a Course in Animal Care is calling! Enquire today.