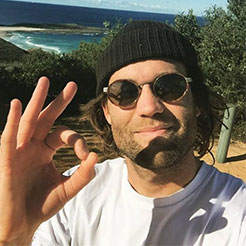 Rick has just celebrated his two-year anniversary as Content and Social Media Manager one of the biggest names in international surf media, Stab Magazine.

“Lifestyle and quality of life are my number one career priorities. I’ve always felt that I work best when I’m feeling healthy and engaged in my field, whatever it may be. You’re more alive, more creative and it shows in the output.” See what other tips Rick has for anyone starting out in the social media field and how he came to land his dream job!

I moved to Sydney after completing my Bachelor of Business (majoring in Marketing) at the University of Newcastle. I started from ground level, working in a surf store, progressed to an assistant store management position, networked, and eventually landed a gig at the Surf Dive’n’Ski/General Pants head office. My role at the time was in marketing and e-commerce. I learnt a lot in that five year period.
A position became available working for Stab Magazine (a long time favourite of mine) running their social, I applied, interviewed and haven’t looked back.

I’ve never really had a clear idea of what I wanted to do. No five-year-plan whatsoever – and still don’t! I guess I’ve always had a passion for surf culture and an interest in marketing in general. I try to take things one year at a time, continually reassessing whether I’m happy. I need to feel like I’m progressing in some form, moving towards my ideal work-lifestyle mix. I value the quality of life over remuneration and believe if I have that aspect in order, the rest will follow.

I always wanted to work in surfing or music. I didn’t know exactly how my title would read, or what a day would look like, I just knew that was where I belonged.

Washing dishes in a pub bistro. It was torturous. Looking back, however, I believe it was the horrible experiences that helped push me through my studies.

Stab Magazine is one of (if not the most) recognisable names in international surf media. We cover news, editorial, fashion, hardware and films, create our own bespoke content and double as a creative agency for our partners inside and outside of the industry. Our concept shoots hold cult status in the world of surf.

Explain a typical day in the office…

Dynamic, unpredictable and thrilling! Whether it’s reporting on breaking news, brainstorming compelling editorial ideas or executing engaging projects for our partners, our roles are highly fluid. There really is no typical day at Stab.

Name the best parts of your job

The travel opportunities are fantastic. The ever-evolving, moving target that is Social Media. It can be fun, but it can be tough!

Cliché alert! Follow your passions and the money will come. Never trade who you are for a salary.

What do you wish someone had told you before starting in social media marketing?

That platforms are businesses too and they’ll continue to change the game at will to grow their bottom lines!

What qualities and skills should people have if they want to become a social media marketer?

A desire to create. Sure you need to keep up with trends, but mostly it comes down to getting a kick out of curating and handcrafting content that inspires and compels.

Where do people have to start to get into social media marketing what is the standard salary?

Initially, the social media game was considered an intern or junior role and compensated accordingly. I believe now people are understanding the power of this channel and are dedicating resources (including salaries) more generously.

Earlier this year I followed the surfing world tour to three different locations in Australia and Fiji, interviewing athletes writing and co-producing multiple short film pieces for Stab and Corona’s web and social channels. It was a huge project – a real comfort zone breaker – and we pulled it off with minimal resources a little more than a two-to-three-man team.

Our increasing creative agency commitments are opening up some great opportunities in my current role. I’d like to continue building and widening my current skill set at Stab while seeking new areas of interest.

Tell us what life outside of Stab is like for you…

About a year ago a friend and I started an indie record label called Third Eye Stimuli. We’re not trying to take the world by storm, rather curate and foster a community around the music and culture that we adore. We dedicate our spare time working on it, reinvesting everything we earn. I’m excited to see it grow in the future, but in the meantime, I’m just enjoying it for what it is.

Enquire about a Course in Social Media Marketing and land your dream job doing what you love, just like Rick!