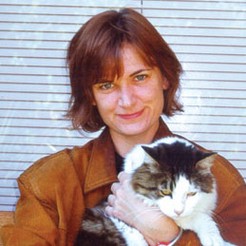 'Just because you can put one word in front of the next, doesn't mean that they are going to be the right words. You have to be able to have an ear, eye and feeling for it.

Sonya took her first steps to becoming an author when she decided at the age of nine she wasn't good at much else besides writing. Her initial forays into the world of fiction included tales about killer ants, but her stories soon evolved and she had her first book, Trouble all the Way, published when she was 15.

Sonya has been described as the finest Australian writer of her generation, a claim strengthened when she took out the Astrid Lindgren Memorial Award in early 2008. This Swedish award is the world's biggest prize for children's and youth literature. It's named after the creator of Pippi Longstocking and worth a whopping five million Swedish kroner (A$880 687) – a fine accompaniment to Sonya's raft of other awards. Sonya has recently published Midnight Zoo.

What inspired you to write at such a young age?

I was the sort of kid who wasn't very good at doing things. I wasn't good at sport or maths – the only thing I was good at was art. I was about nine when I realised I could write a story and I think I fell into it because it was one of the rare things I could actually do reasonably well. As the years went by and I became a teenager, writing gave me some sort of control in my life. I was one of six kids – they were all outgoing, boisterous and friendly, whereas I was pretty shy – but my ability to write gave me a bit of ground to stand on. In my stories I was able to create the world how I wanted it to be, not the way it actually was.

What did you originally write about?

When I was a little kid I used to write about the attack of the killer ants and children being kidnapped and dumped in the desert before finding wild ponies and riding them home. As I became a teenager, I started to write more about the kind of world that I knew. I was reading a lot of American stuff and enjoying it, but it wasn't Australia and it wasn't what I knew. My first book, Trouble All the Way, was about a teenager living in a suburb with his family, going to school, fighting with his little sister and doing that sort of thing. I still write about the suburbs quite often, but I do range around. I hope the things my books look at now are a bit more interesting than wagging school and fighting with your little sister.

What is the process you go through when you write a book?

I tend to write only one book a year, so I spend a lot of time thinking about what I'm going to write. I generally start with a very basic core idea, an abstract of a plot, character or idea that I'm interested in. Gradually, as I'm outside playing in the garden or painting the house, I start to come up with ideas that can attach to that original idea until I have enough of them to form the basic skeleton of the book. I then put them up on storyboards and flesh out the ideas. I used to start writing straight away, work like a demon and get the book finished in about six weeks, but I'm getting lazy in my old age and it takes me a little bit longer now.

Do you have a good work-life balance?

I work from home so I am so used to not having to get up in the morning and catch a tram. I find it very difficult to imagine people are living these serious important lives – I slouch around the house on an eternal weekend. But in exchange for that sort of nice life, I am constantly plagued by a niggling terror that if I don't sit down and write something soon, I am in trouble. That does tend to take the gloss off most lying-in-bed mornings.

What did winning the Astrid Lindgren Memorial Award mean to you?

It means that some of the terror in my life is damped down a little bit. People write books for a lot of reasons and there are a lot of pressures, including publishers who are always wanting another book. For me, that pressure is focused around issues about who's going to pay the mortgage if I don't write. This award at least solves those sorts of financial problems and it means that eventually I might be able to retire.

Awards have always been pretty important to win for the money since writers, particularly in Australia, don't make very much. I also like winning them because I just hate to lose. I have been on lots and lots of short lists in my time and I find it quite depressing if I'm on a short list and I don't win.

What gives you the most pleasure when you write a book?

I enjoy the creative process and having the ability to conjure something up out of nothing. I like that the book I am working on at the moment didn't exist in the world this time last year – it's a completely whole thing brought out of empty space. Making a sentence read exactly right also gives me pleasure. I know a lot of writers would say they enjoy the responses from readers, but I find that my first loyalty is to the book, and what makes me happiest is if I'm happy with it.

Is writing something that comes naturally or a skill that can be taught?

I definitely think you need an innate skill to be able to write well. It's like swimming – you can teach somebody how to swim, but they are not going to necessarily be Ian Thorpe. Just because you can put one word in front of the next, doesn't mean that they are going to be the right words. You have to be able to have an ear, eye and feeling for it – just like any of the arts.

A lot of people go through these courses but not many people get published at the end. I have nothing against anybody sitting down and trying to churn out a book, but I do have something against the people who make a lot of money out of telling people they can do just that. Mostly what annoys me is the cheapening of the craft – they seem to suggest that anybody can write, whereas in fact, not everybody can do it. I learnt through blood, sweat and tears, not by paying a fee.

What do you need to be a good writer?

It's good to have a place where you can work, although I started writing my book lying on my bed sharing my bedroom with my little sister. You also need a laptop and a surface to work on, as well as coffee and chocolate.

What advice do you have for a young person thinking about a career in writing?

Mostly what I remember from back when I was young was how many mistakes I made, how many manuscripts I started but never finished, and how many pages of work I threw away because it didn't lead anywhere. I think kids tend to think if they can't do things right the first time, then they can't do it at all. However, you learn how to write just like you learn how to do anything – through practice, practice, practice.

Prepare to unleash your creative mind when you enquire about a Course in Writing.