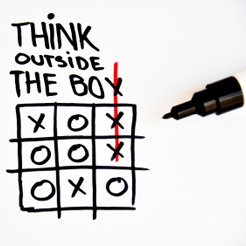 Buzzwords: ‘thinking outside the box’

Jack Donaghy: That’s the best presentation I’ve ever seen. Get started right away.

Can we look at this bottom-up? We can go offline until we’ve had a chance to action it and test the waters before we roll it out – and then we can touch base to make sure we’re on the same page and not stuck in our silos.

Aargh! Every single one of us has been hit with jargon and sometimes been bamboozled by it. Why can’t people just say what they mean?

The best and most effective communication is simple, clear and direct – so why do people insist on trotting out tired phrases that skirt around the issues? Many of us are guilty of relying on jargon to get around saying what we really think or mean, perhaps because we think it’s expected of us – and everyone else is doing it. The problem is that these expressions can leave newbies unnecessarily confused or intimidated.

Jargon can reinforce power relationships and get in the way of a frank and open discussion. If you’ve been at the receiving end of jargon-ese, then you might need and enjoy our new ‘buzzwords’ series, which aims to demystify those problem phrases, fashionable keywords and overused acronyms – and may you never leave an interview or meeting wondering if you know enough Worklish again!

Buzzwords #1: thinking outside the box

Let’s kick things off with a phrase that seems to have been around forever: ‘thinking outside the box’. We’ve all heard it and it was even named as Britain’s most despised example of business jargon in 2008.

Some of us might have been asked to demonstrate it in interviews or ‘brainstorming’ sessions, and many of us struggle to understand the difference between this saying and the much more straightforward ‘problem-solving’. And that could well be because there actually isn’t much difference.

Asking applicants to demonstrate ‘out of the box’ thinking became popular in the 70s and 80s when corporate gibberish really began to take off. The phrase is commonly linked to a puzzle involving nine dots in three rows of three. The interviewer might ask the applicant to draw through as many dots as they can in as little moves as possible. A successful answer would draw outside of the dots in order to run lines at wider angles, finishing in just four moves.

The idea of ‘thinking outside’ of something, whether that’s a square, a box or any other quadrilateral, is simply about thinking beyond the usual boundaries. The first step is to step away from the problem to work out exactly what ‘box’ you might be in – as if you’re looking at it from a birds-eye view. Are you limiting your ideas to the short term or getting caught up in minutiae? Do you need a broader focus or input from others? Are you following the same patterns you always do in order to come to a decision?

While these boundaries are all worth considering, don’t presume that once you’ve moved out from under the box, that the ‘big’ idea is suddenly going to strike like lightning. Coming up with an original and innovative solution that flies in the face of convention might involve freeing up your creativity but it still requires research, testing and talking to others.

‘Thinking outside the box’ means looking at a problem laterally and taking a new perspective. If you’ve been asked to demonstrate this in an interview situation, then try to think of a time when you tried something new and what made you come to that decision. At some point you probably stepped outside the box, so try to pinpoint just how and when you did that – who knows, you might be more of a maverick than you think.

What’s your least favourite jargon? Let us know and we will write about it in our Buzzwords series.