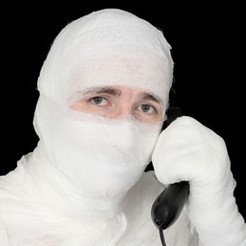 Calling in sick to work

A few years back, a Commonwealth public servant was caught faking lung cancer in order to get out of work. If you hate your job so much that a terminal illness sounds better than showing up at 9am, start looking for another job, pronto. This kind of sickie is not only unfair to your employer; if you’re found out, your job (and any future employment prospects) will go down the drain, fast.

Many people consider sick days as part of their annual leave. But when does taking a day off damage your career and what does it actually cost employers?

The cost to Australian businesses

Just as employees who consider the office stationery cabinet as a supplies store for their desk at home are, in effect, stealing, workers who use their sick days inappropriately are costing their employer money.

Absenteeism, legitimate or otherwise, costs the Australian economy approximately $7 billion each year, and it is estimated that record absenteeism levels in 2010 cost Australian businesses as much as $30 billion. On an average day in Australia, four to five per cent of the workforce calls in sick.

In America, a 2007 online survey by US website CareerBuilder found that 32 per cent of workers admitted to calling in sick when they felt well at least once in the past year and one in ten said they did so three or more times.

Using your sick days for good, not evil

Granted, coming to work with eyes streaming from conjunctivitis is not recommended. Soldiering on when you really are ill is regarded in most workplaces as counterproductive.

In 2007, a study commissioned by Medibank Private, Economic Modelling of the Cost of Presenteeism in Australia, found that presenteeism, the loss of productivity when employees come to work but aren’t fully functioning due to illness or injury, costs the Australian economy over $25 billion each year – nearly four times the cost of absenteeism.

No one wants to hear you cough and splutter all day, much less catch whatever virus is having a party in your body. Use your sick days when you need to. By staying away when your health isn’t up to scratch, you’re doing your co-workers a favour while earning the added bonus of catching up with Oprah and Dr Phil.

Sometimes temptation is difficult to resist. The Internet has opened a world of opportunity when it comes to obtaining fraudulent doctor’s certificates. If you value your job, steer clear of fake documents. Many employers are attempting to crack down on those who are trying to rort the system with fake sick days and if you get caught out, you’re likely to face criminal charges and may wind up losing more than just a day’s pay.

Your boss wasn’t born yesterday. He or she is guaranteed to take your ’24-hour bug thing’ excuse with a grain of salt. Likewise, if your excuse involves your dog burying your car keys, sustaining an injury after falling into a snake pit at a weekend party or being too fat to fit into your work clothes, get out from under your doona and get into the office.

When it comes to taking the day off, honesty is the best policy. Talk to your boss the day before – maybe you can negotiate a personal leave day if the stress of work is getting you down. This is the most considerate way of operating, so your co-workers aren’t put out trying to cover your work as well as their own.

If you really can’t tell the boss that you need a break, try not to embellish your sickie excuses unnecessarily. Use elaborate details only if you write them down or have a superhuman memory. It’s never fun coming in the day after a fake sick day and getting the details of your illness completely wrong.

Karma warning – if you’re chucking a sickie, beware, taking an extra day off to make a long weekend may guarantee that, upon returning to the office, you could very well get sick for real. Only you probably won’t be able to weasel another day off without looking suspicious. Don't be the boy who cried wolf.

No-go zones – there are some obvious places where you should not be caught on a sick day. In a company car is one. On a golf course is another. Likewise, winding up on the news for winning the trifecta at the Melbourne Cup is not smart when your boss thinks you’re at home with severe bronchitis.

Go incognito – returning to work with a suntan is not good form. If you have pulled a sickie, try to keep a low profile. Boasting about your beachside getaway in the lunchroom is a no-no.

Know thyself – figure out the real reason you can’t face the office. Do you hate your job? Perhaps you should try looking for a new one. Too many big nights out and need to catch up on sleep? Consider having one less schooner at the pub or keep the hard drinking for a Friday night.

Chucking a sickie every once in a while may seem harmless. Some even say it’s a great Australian tradition. If you’re going to call in sick to work (when you’re feeling fine), be courteous and respectful of your employer and co-workers. Better still, find a job that you love and you’ll never want to miss another day of work again!