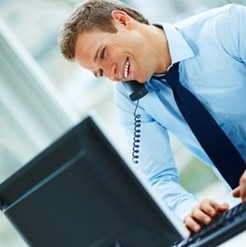 How social media can work for your business

The popularity and ubiquity of social networking is forcing businesses to think hard, not only about how to regulate its use by employees, but how to take advantage of the business opportunities it presents. Many organisations are now using the connective power of social media to channel their employees’ social networking activity into positive and productive directions – to enhance their reputation, productivity, innovation, collaboration and employee engagement.

Here are some ways that social media at the workplace can be used for good, not evil.

Believe it or not, social networking can actually boost your business’s productivity. More than half of the Fortune 100 companies have Twitter accounts, and two thirds of those use it to enhance productivity in areas such as customer service.

For example, electronics retailer Best Buy recently launched ‘Twelpforce’, which equips customer service representatives with Twitter accounts that they can use to answer customers’ questions. While some see this as just another gimmick, many claim that this has improved the customer service reps’ ability to efficiently help their customers.

Employees could also use social media to share with other employees and discuss how they’ve used it to improve their productivity or customer service – and some companies even run contests to see who’s come up with the best idea.

Collaboration is critical to business success, and canny employers will take advantage of the opportunities for collaboration that social media offer. Virtual-meeting and collaboration applications will play an increasingly prominent role as teams and individuals become more and more dispersed in a global environment – where a laptop is all it takes to have a business meeting.

Of all the potential uses of social media, brand building is seen as the most promising. Fifty four per cent of Fortune 100 companies use Twitter to connect with customers, and 29 per cent have a fan page on Facebook. Companies such as IBM and Sony use social networks to spread their corporate news and establish dialogue with their customers and stakeholders.

And while you may think that those in the top jobs don’t have time for social networking, 30 per cent of CEOs have their own Facebook page. The days of leaders pulling strings from behind closed doors are being replaced by a new era of accessibility and community, thanks to social media.

Social networking has opened up new avenues for the instant dissemination of both positive and damaging feedback about a company. In an era when branding, both personal and organisational, is more important than ever, one small tweet spread exponentially through cyberspace has the potential to make or break a company’s reputation.

Despite the occasional high-profile incident – such as when Virgin Atlantic fired 13 flight attendants for posting their candid thoughts about the company on Facebook – a recent Manpower survey shows that only four per cent of companies worldwide believe their reputation has been in any way damaged by social networking.

Employees are an organisation’s greatest cache of knowledge, and social media offer new ways to unlock and organise that knowledge. Online communities have already become a powerful forum to connect people with similar personal or professional interests, enabling the capture and transfer of valuable information.

Within an organisation, social networking can be used to discuss and disseminate new ideas, share best practices and foster mentoring relationships.

Progressive companies are always looking for new ways to advance and innovate, and social media are opening up exciting new developments which allow them to improve their relationships and communications – especially with those who have traditionally been hard to reach in a targeted and sustained way.

IBM, for instance, has introduced ‘Innovation Jams’ – gigantic online brainstorming sessions attended by its global employees, partners and customers – to garner new ideas which have led to dozens of new initiatives.

The key to any company’s success is its ability to keep employees intellectually and emotionally engaged in their work – and social media provide the perfect medium for keeping employees aligned with a company’s mission and vision. They can be used to encourage dialogue between leaders and employees, and foster a team mentality.

Company-sponsored social networks can help connect teams in remote offices so that all employees remain connected and focused on their collective goal.

Professionally oriented social networks such as LinkedIn are particularly helpful for making business connections and recruiting prospective employees. A Deloitte study found that 23 per cent of companies already use social networking as a hiring aid.

As an example, Manpower’s operations in Greece use Facebook to host a monthly virtual ‘open house’ where job candidates and clients can meet online, network and attend sessions on industry issues.

Let employees develop their own guidelines

Since social networking technologies and their uses change so quickly, any policies around their use should be flexible and fluid to evolve with the times. The best approach to governing social media activity is to let employees help develop and enforce your company’s guidelines. This will promote trust and adherence to the guidelines that are then established, while allowing employees to ‘own’ the process.

Social networking should be integrated into your company’s overall practices rather than be seen as an extraneous or frivolous activity. For the ‘millennial’ generation, access to social media will simply be taken as a given, rather than a special privilege.

Leaders need to see that social media can actually help their organisation and should look to their own employees for ideas about how it can best be used. This sort of technological change leads to new ways of working – and by embracing change rather than resisting, organisations can help give themselves a competitive edge.

Can you think of other ways that organisations can use social networking to help boost business? Leave a comment below and let us know what you think.