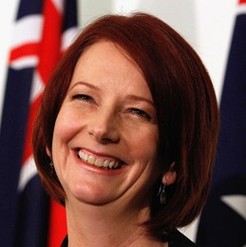 How to become prime minister: the path to the top

The road to the Lodge has sometimes been a rocky one, as recent events have demonstrated. The path can be arduous and is not for the faint-hearted. Australia's former prime ministers have been a diverse lot, some colourful and some more sedate, coming from both sides of politics.

Most prime ministers have demonstrated political leanings from an early age, and many have come from a background in law. Only one has managed a rock band, only one was prime minister for less than a fortnight, only one has disappeared under mysterious circumstances and only one holds a world record for drinking beer.

Here’s a look at Australia’s last five prime ministers and the paths they took to get to the top.

As of 24 June 2010, Julia Gillard is Australia’s first female prime minister. The events that transpired to hand her the prime ministership were remarkable and unprecedented. After less than one term in office and with his popularity plummeting both with his party and the public, former prime minister Kevin Rudd stood down in response to Gillard’s leadership challenge and handed Gillard the reins of power uncontested.

Gillard’s political bent was evident from an early age. Hailing from a working-class background, the Welsh-born and Adelaide-raised Gillard studied law and arts at the University of Adelaide, where she became involved in student politics. She worked as a solicitor and union lawyer and made three failed pre-selection bids for a federal seat before working as chief of staff for Victorian opposition leader John Brumby between 1996 and 1998. Gillard entered Parliament in 1998 when she was elected as the member for Lalor in Melbourne, moved to the frontbench in 2001 as spokeswoman on immigration and joined Kevin Rudd’s team in 2006.

When Rudd came to power in November 2007, Gillard became Australia’s first female deputy prime minister, as well as holding the portfolios of education, employment and workplace relations, and social inclusion.

Kevin Rudd was swept into power in November 2007 on a wave of hope and popularity after 11 years of Liberal rule under the Howard government, only to experience a spectacular fall from grace and have his term prematurely cut short after two years and seven months. In response to Julia Gillard’s leadership challenge, Rudd stood down and relinquished the prime ministership on 24 June 2010 to avoid an inevitable defeat at ballot. Rudd was the first Labor prime minister to lose office after less than one term.

Rudd was born in Queensland and spent much of his childhood on a dairy farm. He joined the Australian Labor Party (ALP) at the age of 15, completed an arts degree in Asian studies at the Australian National University (ANU), and worked at the Department for Foreign Affairs from 1981 to 1988. Rudd was appointed chief of staff to the Labor opposition leader in Queensland, Wayne Goss, in 1988, worked as a senior China consultant for KPMG, and became federal member for Griffith in 1998. He became shadow minister for foreign affairs in 2001, federal leader of the ALP from 2006, and was elected prime minister in November 2007.

John Howard was the second longest-serving prime minister after Sir Robert Menzies. He served as the member for Bennelong from 1974 to 2007, was federal treasurer to Prime Minister Malcolm Fraser from 1977 to 1983, became leader of the Liberal party and Coalition opposition from 1985 to 1989, was re-elected as leader of the Opposition in 1995, and led the Liberal–National Coalition to victory in 1996. Howard lost the federal election in 2007 and was the second Australian prime minister to lose his own seat.

John Howard grew up in Earlwood, Sydney, studied law at the University of Sydney and practised as a solicitor for 12 years. He was active in Liberal party politics from the age of 18 and served as president of the Young Liberals from 1962 to 1964. He was the only Liberal prime minister to be educated in government schools and was given the name Winston (his middle name), after British Prime Minister Winston Churchill.

Paul Keating came into power in 1991 after winning a leadership challenge against then prime minister Bob Hawke. He went on to win an ‘unwinnable’ election in 1993 but then lost the federal election in 1996.

Keating grew up in Bankstown, Sydney, attended a technical college but not university, worked as a clerk and then as a research assistant for a trade union. He joined the Labor Party as soon as he was eligible and became President of the ALP’s Youth Council in 1966. He was elected as federal member for Blaxland in 1969 at the age of 25, making him one of the youngest federal parliamentarians, and was treasurer for Bob Hawke between 1983 and 1991. Keating launched a leadership bid in June 1991 against Hawke, but lost and then resigned as treasurer. However, his next attempt at the leadership in December 1991 was successful, and he became prime minister.

Keating was an aggressive debater famous for his caustic tongue. Love him or hate him, he knew how to deliver a scathing insult. Some of his more well-known putdowns include calling John Howard a ‘little desiccated coconut’ and this: ‘I am not like the leader of the Opposition. I did not slither out of the Cabinet room like a mangy maggot…’

Hawke was born in Bordertown, South Australia, and at 15 boasted that he would one day become prime minister of Australia. He won a Rhodes scholarship and started a Bachelor of Arts at Oxford University, then switched to a Bachelor of Letters and wrote a thesis on wage fixing in Australia. Hawke started a PhD in arbitration law at ANU and became a student representative on the University Council, but then abandoned his studies to accept a job as a research officer at the ACTU (Australian Council of Trade Unions). He spent a decade as ACTU president and was federal president of the Labor party from 1973 to 1978.

Hawke led the Labor party to victory in March 1983 after only two years in parliament, and only one month as leader of the opposition. He went on to win three consecutive elections and was prime minister until 1991.

Like ex-prime minister John Curtin, Hawke overcame an alcohol addiction and remained a teetotaller while he was prime minister.

Paul Keating managed a rock band, The Ramrods, during the 1960s.

Frank Ford was prime minister for only eight days in 1945. He was sworn in after John Curtin died but lost a leadership ballot a week later.