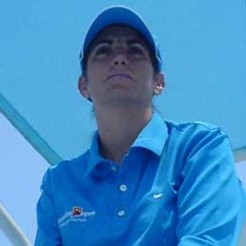 'Every now and again when players are misbehaving, or the match is particularly close or tense for some reason, I feel some pressure, but I don't think it's any different to any other job, I just have to deal with it.'

Kerrilyn has been a tennis official since 1988 and now works as a chair umpire and has the final say during a tennis match.

Kerrilyn has officiated at all four Grand Slams – Australian Open, French Open, Wimbledon and US Open. When she did this interview she was working at the Sony Ericsson Open tournament in Miami where many of the top ranked players are competing, including Roger Federer and Justine Henin.

Why did you decide to pursue a career as a tennis official?

It actually started as a hobby. When I was 16 I joined the local umpires association (Tennis Officials Australia) and it was basically something I did on a few weekends. During this time I was fortunate enough to work each year at the Australian Open as a line umpire. After seven years I started to do chairs and found myself taking weeks off work for my umpiring duties. Suddenly I was missing too many days of work to still consider it as a hobby, so I resigned from my job in 2001. At the time I was working for local government in customer service and for the last two years I was there I managed to get extra time off work to build up my hobby, to the point at which I could say I felt confident enough to know that I could get enough work to keep me going.

What training is required?

Initial training involves a couple of days at seminars where people learn the rules of tennis, as well as a couple of hours on the court to learn the basic techniques. From there people are able to join Tennis Officials Australia and do local tournaments where they are watched and evaluated to see whether they can move up the ranks.

Once you get to a point where you are doing chairs in Australia you can proceed to an international level. The International Tennis Federation (ITF), the Association of Tennis Professionals (ATP) and the Women’s Tennis Association (WTA) run international schools. These schools run over two or three days and involve an exam and a practical component where participants get up in a chair and are evaluated on how they officiate a match.

Level 1 school is done by the national association soon after you start. After completing level 2 school people get their white badge and can umpire small professional tournaments and top-level junior matches. Successful completion of level 3 school awards participants with a bronze badge and qualifies them to officiate early rounds of the Australian Open and other professional events.

After that, a committee made up of a representative from each of the tennis bodies controls an official’s career progression. At the end of each year this committee looks at the work people have done, evaluations they’ve received throughout the year, and then decides who is eligible for a promotion. They can promote people to silver badge, which is where I am at now. The final level is gold badge and entitles people to chair the finals of the Grand Slams.

Is a gold badge a promotion something you are looking forward to?

I can’t apply to become a gold badge, someone else makes that decision. I’d like to reach that level one day, but it’s not something that I have a lot of control over. My belief is that if I keep doing the work and keep performing, then a promotion is a consequence of that performance.

What are your responsibilities as a chair umpire before a match?

Before the match I have to organise the score card or computer – at professional events we conduct our scoring with a small PDA (Personal Digital Assistant). I also make sure I have all the necessary equipment, know who all the players are, and sometimes there’s a little bit of paperwork. Then 10 to 15 minutes before the match I go out and make sure the court is in order, check the nets, see whether the ball kids are ready, test the computer and scoreboards, and ensure that the players have chairs, towels and drinks.

Once the players come out on the court, the coin is tossed and I make sure they are aware of the match conditions – including the number of tiebreak sets, the number of challenges allowed with the Hawk-Eye system, and when the balls are going to be changed – as these can vary from tournament to tournament. Once that happens I get up in the chair and the match can start.

What do you do during a match?

A chair umpire is responsible for chairing and controlling the match, and my main job is to call the score. I have final say on line calls and the ability to overrule line umpires, so I have to keep an eye on every single call. I also ensure that the players adhere to the code of conduct – making sure they behave and play within a certain amount of time – and sometimes I need to make crowd announcements to keep spectators under control.

Do you find you’re under much pressure during a match?

I think it’s like any job – the more I do, the more comfortable I feel and the less pressure there is because I am more confident to handle any situation that may arise. Nine out of ten matches are routine and I feel comfortable that I have complete control over what I am doing on the court. Every now and again when players are misbehaving, or the match is particularly close or tense for some reason, I feel some pressure, but I don’t think it’s any different to any other job, I just have to deal with it.

What is the most memorable match you’ve officiated?

One of the biggest matches I’ve ever done was the time I umpired Kim Clijsters and Martina Hingis two years ago at San Diego. It was the first time I umpired two players who had been ranked number one in the world and it was a nice thrill. This year at the Australian Open was one of the best matches I’ve ever officiated – it was a quarter-final between Ana Ivanovich and Venus Williams.

Who was your sporting hero?

I was a big fan of Pat Cash as a teenager. Steffi Graf is another player whom I admire because she’s got a great record and was an amazing player.

Do you ever get starstruck?

It’s a great environment to be in and I certainly have had some pretty cool experiences. It’s sometimes nice to think that I’m in a foreign country and Roger Federer is dining at the same restaurant. But I am constantly coming into contact with well-known tennis players, so it’s not such a big deal any more because I’m used to seeing them. At the end of the day they’re just people, it doesn’t matter how much money they earn or how many magazine covers they’re on. The vast majority of tennis players that I deal with day-in and day-out aren’t tennis superstars, they’re just people who earn a living playing tennis.

How much travel is involved in your job?

For the past seven years I’ve travelled approximately 30 weeks each year. Overall I do enjoy the travel, but sometimes it becomes a little bit of a chore. I try my best to see more of the places that I visit rather than just spending all my time on the tennis courts. This job provides a great opportunity for travel and allows me to meet people from all over the world. I’ve had some amazing experiences and I get the chance to go to places that most people might never get to see – I’ve been to over 40 countries so far. As long as I enjoy my experiences, I’ll keep doing it.

How are you involved with the Sony Ericsson WTA Tour?

I am now contracted to work with the Sony Ericsson WTA Tour for most of the year. The WTA has recently changed the way they employ officials, which brings them in line with the ATP tours and the Grand Slams. In the past they employed people for each individual tournament, but the WTA wanted to continue to evolve as a professional organisation and this is the first year that they have contracted officials to work for them for a number of weeks.

This change doesn’t really change my schedule, but it’s a nice compliment to be asked to be involved in this new system, and it offers a little bit more job security. The tour has a small group of officials who travel and work at the vast majority of events held throughout the year. This higher level of consistency means that the officiating improves and the players have more respect for the umpires.

Is it common for officials to have another job outside of tennis?

Line umpires usually have another job when they start out because they are doing it as a hobby and need another source of income. At the level of chair umpire when people have their bronze badge, probably 50 per cent of them would have another job. But it is very hard to hold down another full-time job at a silver or gold badge level as there are too many commitments. However, I sometimes do some temp work at the end of the year when I have a few weeks free.

What is your advice for people who are interested in becoming a tennis official?

The great thing about tennis umpiring is that when you start out you don’t have to make it your career. This type of job generally starts as a hobby for most people. So if you like tennis and want to get closer to the action, it’s a great opportunity. Then if you want to continue to make it your career, there are plenty of people who are able to give you help and advice. It’s a long apprenticeship, and it takes at least eight years to reach a gold badge level, but if you like travel, and you like tennis, it may be the job for you.