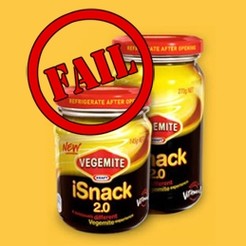 Pity the poor marketing hack, trying to tap into the zeitgeist and produce a marketing campaign that will grab the public imagination and see a product take off. When it works it can be great – but when it doesn’t, you can become an object of ridicule and parody, made only worse by the instantaneous spread of bad press via Twitter, other social networking sites and viral video. Here are some examples of marketing campaigns that failed to hit their mark – either because of poor taste, poor judgment, sheer incompetence or, worst of all, being plain boring.

The name of this new product by the makers of Vegemite – chosen by contest – caused a furore and spawned a multitude of viral video parodies (such as one involving scenes of an outraged Hitler from the movie Downfall). A question mark remains over whether or not the whole exercise was simply a stunt intended to generate publicity and controversy, but the general consensus is that it was just an example of marketers getting it horribly, horribly wrong.

According to well-known advertising guru Siimon Reynolds, the problem with the iSnack name was that ‘it wasn’t in keeping with the heritage of Vegemite. When you create a product that is too big a shift for the consumer in their head, they tend to reject it. That’s what Vegemite did – it has a traditional perception and it chose a high-tech name.’ The result? Epic fail.

Where the bloody hell are you?

Tourism Australia’s ‘Where the bloody hell are you?’ 2006 campaign may have been good for Lara Bingle’s personal brand, but it did little to promote Australia’s profile overseas and attract those sought-after tourists, and was considered by many to be a PR disaster. The ad was temporarily banned in Britain because of its use of the word ‘bloody’, and then in Canada for its implication of ‘unbranded alcohol consumption’ by the opening line, ‘We've bought you a beer’. In Singapore, they ran the ad as ‘So where are you?’ – which doesn’t have quite the same ring to it. The ad generated plenty of controversy, but tourist figures actually went down after the campaign.

So what the bloody hell went wrong?

Obviously, many consider the use of the words ‘bloody hell’ to have been ill-advised, considering the more conservative attitude towards language in many countries compared to Australia. However, Reynolds thinks the supposed failure of the campaign is disputable, and emphasises the many other factors that play into people’s travel decisions – things such as the cost of the trip and the time it takes to get to the country. The jury may be out on the effect of the ads on Brand Australia, but if measured by tourist numbers, the campaign was a dismal failure.

Microsoft’s series of television ads from last year, featuring comedian Jerry Seinfeld and Microsoft founder Bill Gates doing things like shopping for shoes and connecting with ‘real people’, were universally panned as pointless, unengaging, ineffectual in improving Microsoft’s image and, worst of all, not funny. It was a $300 million series of ads about … nothing. The ads were quickly pulled from screens, only to be followed by a string of other celebrity ads featuring the likes of Eva Longoria and Deepak Chopra, but it still seems that Microsoft has yet to hit its target.

Windows’ recent online ‘I’m gonna puke’ ad to promote its Internet Explorer 8 browser depicts a woman who vomits uncontrollably when she discovers what one imagines to be hardcore pornography on her husband’s computer. The husband slips on the mess and she continues to spew all over him. The ad had to be pulled amidst great controversy, with some speculating about whether or not child pornography was implied, or if Microsoft was trying to covertly suggest that if only he’d had IE8’s ‘InPrivate Browsing’, his nasty habits wouldn’t have been discovered. Needless to say, the ad was considered the height of bad taste, not to mention retch-inducing, and dubbed ‘the worst tech commercial ever’ by one technology commentator.

It seems that after Apple’s ‘I’m a Mac, I’m a PC’ ad campaign effectively skewered Microsoft’s image, Microsoft’s increasingly desperate and bizarre attempts to be edgy and cool and push the envelope have mostly backfired. Reynolds says, ‘I presume it’s an example of Microsoft trying to be more hip, but I think you’ve got to take smaller steps to change perception rather than just go outrageous.’ In terms of marketing attempts, Microsoft has yet to really find its feet … but that doesn’t stop it from continuing to be the most widespread operating system in the world.

Pepsi’s ‘AMP up before you score’ iPhone application, which categorises women into 24 types and then uses the smartphone’s internet capabilities to link users to information about them and what they like – intended to help men ‘score’ and brag about their conquests – caused outrage in people who considered it not only crass, but sexist, insulting and exploitative towards women. The backlash was intense and ran like wildfire throughout the industry and consumer blogs.

This attempt to be young, hip and cool simply got it wrong. After the flood of public ire, PepsiCo issued this Twitter apology: ‘Our app tried 2 show the humorous lengths guys go 2 pick up women. We apologise if it’s in bad taste & appreciate your feedback,’ and linked to a hashtag called ‘pepsifail’.

Here’s an example of how one tiny slip of the finger can result in a huge PR disaster. Last year, over one million Velocity members were mistakenly sent an email by Virgin Blue staff offering them free lounge memberships and upgrades to ‘gold’ status, only to have the offer retracted two hours later when the stuff-up was discovered. The follow-up email read: ‘Oops! Due to an error you’ve received our previous email by mistake. Please disregard the free upgrade communication as unfortunately you do not qualify for that upgrade. We apologise for any inconvenience caused. Warm regards, The Velocity Team.’

Warm regards are little compensation for those who immediately booked tickets on the back of the first email, thinking they’d be able to enjoy a flight with all the perks – which include free lounge membership (normally $369 a year plus a $199 joining fee), priority check-in, up to 32 kilograms of free checked baggage and personalised baggage tags. Receiving the follow-up email would have resulted in some pretty unhappy customers. Once again … epic fail.

How to get a marketing campaign right

Siimon Reynolds offers this advice on how to design a successful marketing campaign: ‘The first thing is to say something that matters to people. The second is to say it in a way that people remember or like. If you can do this – say something sensible in a memorable way – then you’re home. But if you get a magazine and look at how many ads are doing those two things, there are very few.’

‘Controversy can work if it makes people talk about the subject and notice the brand. When it doesn’t work is when people notice the brand, but think less of it as a result of the controversy. It has to have some relevance to what you’re selling, it has to be something that the consumer thinks is appropriate, and it has to resonate with people.’