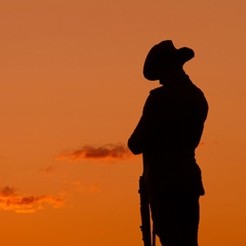 'I'd been living in Turkey for a number of years and, as an Australian, it was inevitable that I ended up working with Australians coming over to Gallipoli for Anzac day.'

It didn't take Will Willis long to be bitten by the travel bug. Originally from Australia, he spent four years living in Turkey before he started a tour company there. He eventually came back to Australia but missed Turkey so much that he didn't stay away for long. Fourteen years later, he's working for Timeless Tours and Travel as their tour leader on the Anzac Gallipoli tour.

Touring people through a place that's so important to Australian history is still the focus for this 58-year-old, and as Anzac Day approaches the Gallipoli tour is about to begin for another year.

What made you choose this particular occupation?

I think it chose me actually. I'd been living in Turkey for a number of years and, as an Australian, it was inevitable that I ended up working with Australians coming over to Gallipoli for Anzac day. I don't regard it as a job. It's an interest and a passion.

What do people experience on a tour that revolves around Anzac Day?

The tour is a very personally significant experience for different people. Some people have close relatives that fought and were killed at Gallipoli. For those people it puts pieces of the puzzle together – they'll bring letters written by their relatives and try to find where that letter was written. It's quite incredible. I've had people that who have recently migrated to Australia from different countries. They come because they're searching for the identity of the country that they chose to live in.

What do you have to consider when taking tours?

You have to know what drives the people that come to Gallipoli and cater to their personal needs. The job is about finding out what people want out of the trip and then delivering that.

What training did you do to get this position?

I'm not a formal travel agent or tour guide. As I became older I developed an interest for travel. I built up my skills and now I'm at university studying military history. You need a background in the travel industry and in the subject area you want to specialise in.

What skills does a tour leader need?

You need an aptitude and a special attitude for tour leading. People pay lots of money to do these tours. For some people it's the big trip of their lives so their expectations are high. On the other hand, the tour company you're working for is running a business and they have to be careful about costs. It takes some time to develop these management skills, which you can only learn on the job.

What qualities do tour leaders need?

With a tour group of 15 people, you've got 15 individuals with different backgrounds so you need to read people. If a bus breaks down or somebody gets injured you have to be flexible. You need to be able to manage people in unpredictable environments.

What has been the most rewarding experience for you in your career so far?

I had a chap on the Anzac Gallipoli trip a couple of years ago whose father was one of the soldiers who landed on the Anzac cove on April 25, 1915. The man was wearing his father's campaign medals. We were at the dawn service, and some Turkish gentlemen were there. One asked the Australian about the medals and the Australian explained his father had been in the original landing of the ninth battalion. Just by chance the Turkish man's father had been in the original group of defenders. Even though their fathers were on opposing sides, the men formed a real connection and they've been in contact ever since. I love the unpredictability of being a tour leader. You can have some wonderful experiences that make the harder times worthwhile.

Have you had any challenging experiences in your career?

I haven't experienced anything major, but we once lost a person on a trip and in the meantime she lost her money and her passport. We had to sort out a new passport and have money sent over so she could continue her trip, all while meeting the expectations of the rest of the group.

Study the subject area or country you're interested in. It's also a good idea to specialise in a subject area to take into your tours, like photography, art or military history.

If you're looking for a job that pays good money then forget it. But if you want a job that will take you around the world, where you get to know the people and yourself, then tour leading is an experience money can't buy.