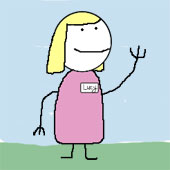 Meet Lucy. She wants a promotion.

A friend, let’s call her Lucy, recently came to me with a conundrum. She had wanted to apply for a new role at her current workplace and had discussed her suitability with her manager, as the role would essentially be a promotion. She was ready for some different challenges but not sure if she would qualify for a full-blown step up the ladder.

Her boss had concluded that she was not, in fact, ready, but was definitely on the way. Lucy then asked for some projects and tasks that she could work on in order to prepare herself for a similar role in the near future. Lucy asked her manager for a promotion

Put yourself out there

This is key, people! Firstly, don’t be afraid to ask for a promotion. Putting yourself on the line and essentially talking up your performance can instil the fear of god into some people, particularly women. You’re essentially putting a magnifying glass on your skills and potential and asking someone to analyse your suitability.

The problem is, employees tend to see the promotion/pay rise question as something that constitutes a ‘yes’ or ‘no’ answer, when in reality it’s an open and ongoing discussion.

A pay rise would be nice, but are you ready for the extra responsibilities and workload that comes with it? If you’re not excelling at the work you’re already doing then it might be hard to convince your manager that you’re ready for more. People progress at different rates. Levels of ambition also differ. Don’t feel like you need to take on more if you actually don’t want to.

You need to prepare yourself for the discussion with your manager. Put together a record of your performance, including how you’ve managed to meet your KPIs and all your other achievements. That way you’ll have solid evidence to show that you’re ready.

Lucy wasnâ€™t sure if she wanted the extra responsibility

And what if you’re not ready?

After asking for a promotion and being – albeit kindly – rejected, Lucy then asked her boss how she could work her way up to that position and together they highlighted some projects that she could take on to facilitate this.

The conversation doesn’t finish when your boss declines your request for a promotion. Just because you don’t happen to be ready right now does not mean that you won’t get there in the future. Ask for some mentoring on how you can progress and gain more experience. This will not only make sure you’re on an upward trajectory, but it will also show your boss that you’re serious about your career and your future at your workplace.

Now back to Lucy

A couple of weeks later, I checked in with Lucy. Over some Peking duck she told me how her boss had – perhaps absent-mindedly, who knows – removed Lucy from some of the projects that were meant to prepare her for a higher position. She was confused that her boss would help her devise a progression plan, only to act as a blockade.

I encouraged Lucy to schedule another chat with her manager to find out what her intentions were. Perhaps she had changed her mind and didn’t believe Lucy was ready for those projects. Or perhaps, with limited time and resources, she was re-delegating to the people she felt were more suited.

Lucy and her manager devise a plan

How to stop this happening to you

If you’re in the same predicament as Lucy, here’s what you need to remember: