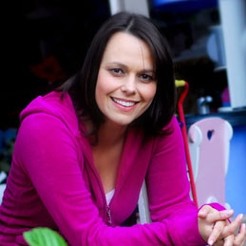 ‘I have always been passionate about creating tribes of women, communities of like-minded people.’

At the tender age of 24 Mia Freedman was the youngest person worldwide to become a Cosmo editor when she was appointed editor of Cosmopolitan Australia. Today she still keeps a finger on the pulse of the media industry with her website Mamamia, alongside being an author, columnist, media consultant for The Today Show and a healthy body image advocate with the Body Image Advisory Group – all with time to spare to be a mother.

I have three kids and I work from home so the mornings are pretty hectic. My husband and I have to get everybody ready for school or kindy and we have to check on the site constantly. It’s like another child! I have a nanny who comes four days a week so I can actually work otherwise I’d not be able to write a word. I try and do some exercise before I sit down at my desk at about 9am and every day is different from that point. Some mornings I will have already done The Today Show by the time I sit down to write. Sometimes I have to write my newspaper columns, other days I’ll just be working on the website or doing media consultancy or keynote speeches or doing interviews. I often have meetings about the website and other projects, so no two days are the same. My happiest days, however, are when I’m just in front of my computer and able to write in peace.

Where did you get the inspiration to start your own website?

I have always been interested in online and that was one of the reasons I left magazines. They weren’t fast enough and I was spending more and more time on the Net myself. I wanted an outlet for my own creativity.

I have always been passionate about creating tribes of women, communities of like-minded people. So, when I was at Cosmopolitan that’s what I did with my body image work. When I did The Catch-Up on Channel Nine that’s what I was trying to do, to reach out to other women. And that’s exactly what I wanted to do online. I didn’t want to be managing other people anymore. I really wanted to have a direct outlet to readers like I do with my newspaper column, except even faster and even more direct. And the only way to do this was to have my own website. There are some beautiful things about that – I do have control, I don’t have politics, and the buck starts and stops with me.

Mamamia has more readers than Vogue or most monthly women’s magazines and yet I am a staff of one person on the editorial and admin side. So even though I get a million page views a month I don’t have any staff. There are a few amazing women who help me out because they want to be involved but I don’t even have a PA. And that was a big shock at first; especially as by the time I left magazines I had a staff of about 80 people to help create my vision. When you go and work for yourself you don’t have any of that support and any of those infrastructures. If I have to send a letter to someone I go out and buy the stamp and look up the address and I know that sounds very normal because it is. It’s very healthy in some ways, but it’s an adjustment after 10 years of having a PA and it’s not necessarily the best use of my time. But for now, it’s the way it is and I’m fine with it.

Did you ever think it would be this successful?

I hoped that it would. I didn’t start Mamamia to make money. I’m always confident in my ability to know what women want and how they think. I’m generalising but you know what I mean. I’ve always been able to tap into the zeitgeist and attract like-minded people around me. So I knew that that was possible and I was confident in that. But it was very daunting going into a medium I knew nothing about.

Do you enjoy the freedom of working from home?

There are many advantages to working for home, and there are some disadvantages too. The main one being that you’re always at the office. Not having that boundary between work and home can sometimes be quite challenging, especially when you’re working on a business that’s your business and it’s open 24/7. But I love the freedom and the flexibility of being able to see my kids during the day and being able to be involved in their lives in a way that’s very different to when you walk in the door at 6 or 7 at night.

Do you have a good work–life balance?

I feel more balanced than I have ever been. I think the two things integrate for me quite well. But it’s never like, ‘Oh phew! I’m done, I’m balanced.’ It’s an hour-by-hour proposition: day-by-day, week-by-week, month-by-month. Some days you think, ‘Gosh, I got it right today’ and other days you think, ‘This is mental! Something’s got to change’ and you throw your hands in the air, and I do that all the time. Where I just say, ‘I have to pull back on work or switch off my computer’ or ‘Enough stories, I’ve got to sit down and get something done!’ So it goes both ways.

You are a great inspiration for working mums. What advice do you have for women juggling their career with motherhood?

It’s so hard to give advice because I’m fortunate enough that I can afford to have someone that comes into my home and looks after my littlest children several days a week. Without that I couldn’t get anything done, especially with kids who don’t sleep much during the day. Whether you’re doing paid work or not doing paid work, just not having any time to yourself every day can be really, really taxing and really do your head in.

Everyone’s got to find their own balance but I guess I believe the key thing for women is having something for yourself. It doesn’t have to be paid work necessarily, it might just be putting your iPod on and going for a walk before your partner leaves for the day, or starting a blog, or making home movies on your computer, just doing something that is for you and about you and not about giving to others, because working mothers are massive givers and end up being last in the queue.

You started working at Cleo at the age of 19. Why were you drawn to the magazine industry? And how did you know that it was right for you?

You don’t have a degree, yet you have definitely succeeded in your career. These days do you think young people can get into the magazine/media industry without qualifications?

It’s really hard for me to know. I don’t have a degree and I got involved in magazines very early, but I found out by the time I became an editor that most of my staff did have degrees – some of them had several. It’s certainly more competitive now than it was, so the bar has been raised. To even get your foot in the door now you often need a degree, certainly to work overseas in the media, I think a degree is pretty much mandatory before you’ll even be considered for a visa. I try not to give individual career advice because all I know is what worked for me. I was very fortunate to have some incredible mentors and some incredible opportunities, but I guess everybody has to make their own decisions about what they want to do.

How important do you think work experience is, particularly in the media industry?

I think work experience is great; any experience you can get, snap it up. I have people working on the website interning, who are just involved for the sake of the experience. It’s a competitive workforce and if you’re not going to do something for free, somebody else will. The first thing that any employer is going to be interested in, even more than how many degrees you’re packing, is how much practical experience you’ve had.

And that’s how you make connections as well. It’s not just about what you can write on your CV. So often jobs in the media aren’t advertised, they just go to whoever’s around and whoever’s a known quantity. That’s how I got my job and how a number of staff that I appointed got their jobs. It’s because I met them when they were doing work experience at Cosmopolitan when I was editing.

Work experience gives you a chance to see if this is what you really want to be doing. You may think that magazines look glamorous, or that marketing looks glamorous, or being a stylist looks glamorous, but then when you actually get a taste of it you might go ‘Oh, that’s so not for me’, and it’s much better that you do that before you’ve gone out and got a job. You don’t want to start chopping and changing too much because that can look flaky.

What characteristics are needed to be in the media industry?

What did you learn from your time in television?

I didn’t enjoy my time in TV for a whole bunch of reasons. Being a TV executive is absolutely not my bag. Ultimately, even though it was very difficult at the time it was a good thing to learn. I’m never going to wonder now; I know that for sure. I can cross that off my list of things I want to try. So ultimately it was a really, really positive thing.

The time after I left PBL (Publishing and Broadcasting Limited) and went out on my own was really difficult at first. I’m really glad I got pregnant again, because had I not, I probably would have rushed back into a corporate job. Being pregnant made me just push through that tough time and discover that I didn’t want to do that anymore, I didn’t want to be in management anymore, I didn’t want to work for a big company. I really wanted to do my own thing and try a different way. I got through the hard part and now I’m reaping the benefits of that decision.