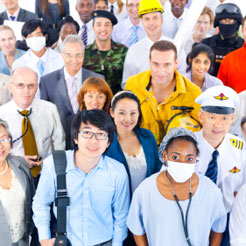 About half of employers are planning to increase their workers’ salaries by up to six per cent, and nearly one in 10 are willing to consider a 10 per cent rise, according to the latest Hays annual salary guide. This comes as welcome news to employees – many of whom had to endure no or minimal wage increases during the worst of the GFC.

‘Sixty-seven per cent of employers predict the economy will strengthen in the next six to 12 months. That is in stark contrast to this time last year, when only six per cent thought the economy would improve,’ says Heap.

There is also good news on the horizon for job seekers, with 45 per cent of bosses reportedly preparing to take on new staff – that’s a 24 per cent increase from this time last year. However, nearly half of that increase will be made up of casual, part-time and contract workers.

Workers in the booming mining and resources sector will reap the greatest gains, as well as those in professional services such as human resources and procurement, with more than half of their employers considering offering significant pay rises. Employees in the finance industry will also most likely receive substantial benefits.

Westpac and the Finance Sector Union will deliver a new collective agreement that will offer 26,000 staff a 10 per cent wage increase over the next 26 months. The agreement is the first such agreement between the union and the bank in almost a decade, and will require staff to work extended hours and weekends if required.

Sydney workers are the top wage earners, although WA and Queensland are catching up as they ride the resources wave. The mining industry experienced its first quarter of profit growth since last year’s crisis, with gross mining profits rising 9.2 per cent to $15 billion between January and March – the first quarterly rise since September 2008. The outlook in mining is promising, though quarterly profits still remain almost 40 per cent below the pre-crisis peak of $24.4 billion.

The chief economist at RBS, Kieran Davies, says that mining profits are expected to ‘dramatically accelerate’ next quarter. ‘The mining sector will be the standout, and outside that I think the recovery will be slower,’ says Davies.

Across all industries, company profits grew at the fastest rate in 18 months, with economy-wide profits rising by 3.9 per cent in the last quarter.

Alongside the mining juggernaut, finance and manufacturing are helping to drive the economy forward, with profits in these industries growing by 47 per cent and 17 per cent respectively, according to the latest Australian Bureau of Statistics figures.

Those industries tied to domestic growth proved to be weaker, with profits in construction and hospitality falling 17 per cent and six per cent, respectively.