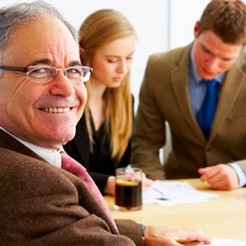 The old and the beautiful: when to retire?

If you’re feeling a bit long in the tooth, then there are other problems to deal with than just memory loss and false teeth. Retirement is also on the agenda and with the financial crisis in our recent past and an ageing population in our future, there is a lot to consider before you make the decision to leave the rat race.

Don’t worry – you are not the only one concerned with your greying hair. The government is also anxious about the impending increase of walking frames and blue hair rinse. With a large percentage of Australia’s population – all you ‘baby boomers’ out there – set to retire in the near future, there will be fewer workers supporting more retirees.

This inverted population pyramid will increase demand for healthcare and aged services. With fewer people paying taxes – because they have all retired – the government will have to foot the bill.

A little help from the government

On 1 February 2010, Treasurer Wayne Swan announced the launch of a $43.3 million Productive Ageing Package aimed at providing training and support for older Australians.

‘We all benefit from the immense value that older Australians add to our workplaces and our economy, not just in terms of skills and work experience, but also life experience,’ says Swan.

For boomers wanting to remain in the workforce, the package will provide a much needed incentive. The money will be used to help workers remain in their current place of employment as well as transition into new workplaces. The package will act in addition to the boost made to the Aged Pension last year.

The establishment of a Consultative Forum on Mature Age Participation is also in the works to advise the government on further ways to benefit mature age workers.

Don’t let boredom get the better of you

If the thought of spending the rest of your days sitting on your porch and eating early bird dinners scares you half to death, then perhaps you are not quite ready to call it quits. Some view the retirement age as a deadline rather than a guideline, which can lead to premature retirement.

With retirement age set to rise from 65 to 67 and life expectancy set at 79 for men and 84 for women, some retirees are heading back to work after finding the boredom of retirement overwhelming.

Keeping a casual or part-time job after retiring can help you keep your sanity as well as a comfortable lifestyle.

Marguerite Griffith and her husband Michael retired from their jobs, as a secretary and the CEO of the Real Estate Institute of Western Australia respectively, only to find retirement was not quite their cup of tea.

‘I like working – I'm not a home person, I don't do merry little projects at home,’ says Marguerite, who now works three days a week at Murdoch University.

Similarly, her husband Michael is now a full-time TESOL teacher and a part-time celebrant, after ‘retiring’ five years ago at the age of 65.

‘I left the Institute just before turning 60. I went mad with doing nothing for about five minutes and then decided to become a celebrant,’ says Michael.

Working as a celebrant means a lot of time planning and leading weddings and funerals, and this combined with his full-time work at a TESOL teaching company means that Michael is busier than ever, but this has proven not to be an issue: ‘Oh no, on the contrary! I love it.’

With the strain of the economic downturn, today’s ageing population is not equipped with adequate superannuation to fund their retirement. So whether you’re doing it for yourself or for the country, staying employed has never looked better.

A 2008 report by the Investment and Financial Services Association (IFSA) revealed that superannuation savings were almost $700 billion short of what is needed to fund a dignified and healthy retirement, equating to over $70 000 per person. This coupled with the recent financial crisis means that retiring is no easy feat.

Back in 1996 David MacDonald retired from his career in engineering after finishing up a contract in the Philippines. Finding there was not much opportunity in the engineering field in Australia, he and his wife bought a farm in country Victoria. He soon returned to the workforce to bring in some income as a pilot (road escort), leading wide-load trucks over long distances, all over the country.

‘Farming is a highly capitalised industry and on 50 acres you don’t yield much income,’ says MacDonald. ‘I picked up some pilot work, which required me to get my pilot certification as well as knowledge on all the traffic and road rules and regulations of each state.’

Although he has now retired from pilot work, MacDonald still maintains his farm, while keeping busy as a member of the Rotary club and the Secretary of the Rural Fire Brigade.

‘I’m still messing about on the farm. I’ve got some cattle and I cut bales of hay, in-between feeding dogs and chooks, chasing snakes and fixing fences – that’s retirement!’ says MacDonald.

‘I think it’s important that anybody who retires should have a number of interests. This way you always have something to aim for and look forward to. While you’re fit and reasonably healthy, continuing in your employment, if you can, is a good thing.’