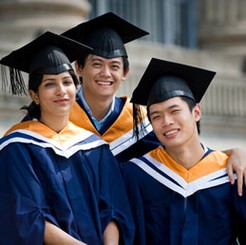 University graduates: who’s getting the work?

After spending three or more years of your life studying, you might be wondering if it was all worth it. So which uni graduates are getting the most work? The Beyond Graduation 2009 survey investigated which university qualifications most often led to full-time employment following graduation.

The survey, by Graduate Careers Australia, collected information from more than 5800 Australian university graduates who completed their studies in 2006 and found that overall, the proportion of bachelor degree graduates who are in full-time work has increased since 2006, rising from 76.9 per cent to 86.8 per cent in 2009. Male bachelor degree graduates were more likely to be in full-time employment across the board than female graduates.

The next most highly employed are health graduates, with 87.1 per cent finding full-time work immediately after graduating, though this had fallen to 84.4 per cent by 2009. This was the only group to experience a decrease in the proportion of full-time employed between 2006 and 2009, but that could be at least partly attributable to the economic downturn.

Creative arts graduates experienced the least full-time employment after graduating, both immediately after finishing their studies and three years later. In 2006 53.6 per cent found full-time work, and by 2009 this had increased to 75.3 per cent.

Being in full-time employment is one thing, but the nature of the work is also significant – is it relevant to the graduates’ studies and long-term career goals?

Five most common occupations for management and commerce graduates: