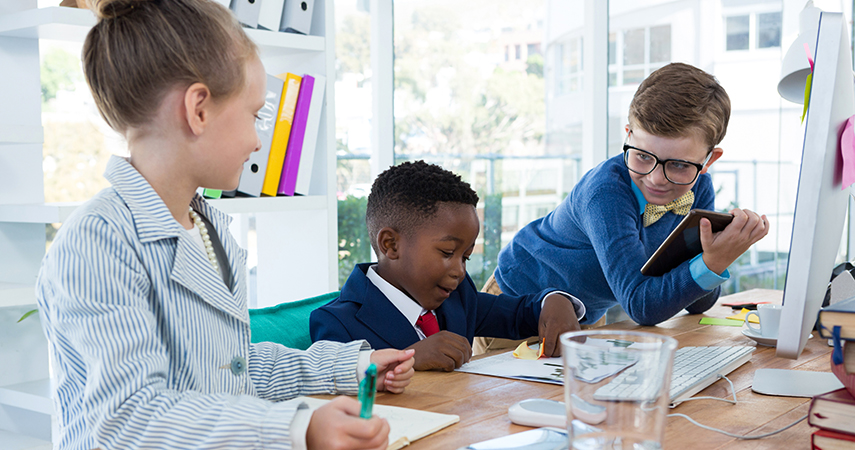 What did you want to be when you were a kid?

To celebrate Children’s Week, the Career FAQs team returned to the good old days of sticky fingers and grazed knees, delving deep into the memory banks to unearth some of their earliest childhood ambitions.

From thespian to adventurer, professional soccer player to Quidditch player, we’ve had a range of dreams and aspirations – some of which have been achieved. But, regardless of whether we grew up to be what we wanted to be, or have completely left our younger selves behind, it truly is the dream that counts.

So for everyone out there, young and old, dreaming about their career direction: remember to dream big and, no matter what anyone says, never lose your dinosaur. You never know where you might find yourself. 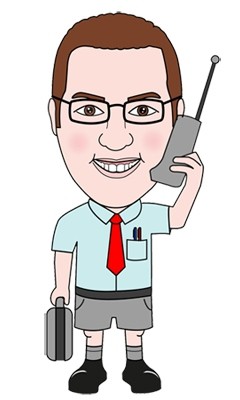 Looking back on my work history, which started around the age of seven when I’d cut up the family fruit supplies, add yoghurt from the fridge and sell these ‘healthy snacks’ to our long-suffering neighbours on weekends, I’m sure I was destined to ultimately make myself unemployable and to work for myself.

In reality, I served a long and circuitous ‘hands-on’ apprenticeship to finally becoming a business owner/operator. After having a go at everything from selling T-shirts to sports marketing and investment banking, I’ve always been involved in the world of business. And, blessed with ‘the gift of the gab’, if I’m passionate about something I can usually ‘sell’ the product.

I know I’m not oriented towards ‘detail’, and I’m poor at following directions and rules. So essentially my choice was simple … continue to make my future employers crazy, or find a creative vehicle that I can drive and that will allow me the freedom to express my entrepreneurial spirit while building something of value.

My mum started her own business when I was only one year old, and I grew up thinking that that was the norm! And so, from early on, I wanted to have my own business like my mum. When I found out that not all mums owned their own businesses, I opened up the arena to a range of other trades, including becoming a teacher and a tour guide. One option that did stick with me was photography. I dreamed of becoming a photographer, taking snaps of everything from pets to weddings.

Today, alongside my role as CFAQs office manager, I do own my own business, and I even whip out the old DSLR every now and then. Proof that you really can have it all!

Andrea: from sourdough to SEO

As a small child with a big imagination, my career ambitions ranged from joining the Planeteers to becoming the best Quidditch player Hogwarts had ever seen. But, growing up and realising that no half-giant was ever going to deliver my acceptance letter and exclaim, ‘You’re a wizard, Harry’, I had to set my sights on something a little more muggle-appropriate.

I flirted with a range of career options but one that I remember to this day was my aspiration to become a baker. For a while, I entertained the idea of answering to no one but the dough, waking up with the sun, and getting my hands dirty – some elements of which I can see in my career now as a marketing manager.

And, while I was never really destined for the life of a baker, I’ll always have a soft spot for the smell of freshly baked bread.

Juls: putting people to sleep since 1984 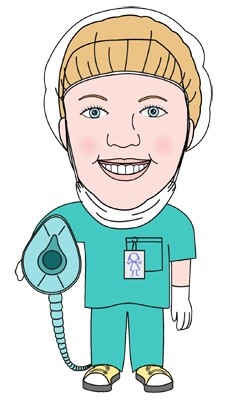 When I was little I wanted to be lots of things. One such career aspiration was to be an anaesthetist. I was eight and if you asked me why I wanted to be an anaesthetist, I would have told you it was because of the ‘low overheads’. Only problem was I couldn’t tell you what overheads actually were and the only reason I had chosen that profession is ‘cause I could spell it. Between that, and my penchant for using ‘big’ words (often completely out of context), I should have realised that eventually I’d become a writer.

Glen: turning into a modern-day Botticelli

I have been fascinated with art ever since I remember picking up a pencil with the wrong hand. Captivated by my father’s photo-realistic portrait artworks that hung throughout the house, I spent countless hours of the day in my sketchbook diary coming up with superhero and supervillain comic book characters during my childhood.

My lack of attention for anything else in school combined with an overactive imagination turned out to be a blessing at age six, when I won my first art competition against two other school kids who were 13 years old. That set my path, so to speak. As I grew older, I discovered my interest for computer graphics as well as realistic portrait drawing, which brought out my competitive side to try to surpass my father.

These days I work as the graphic designer at Career FAQs, undertake a visual communication degree and make commission portraits when I find the time!

Kailash: finding chemistry in my career 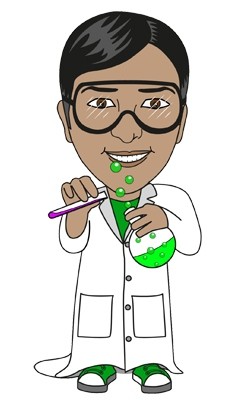 When I was 10 years old and younger, I was very curious about how machines worked, and I did not stop until I got a satisfactory answer. No matter whether it made any sense or not, it had to be logical.

I used to assemble scraps collected from here and there into some sort of a dummy machine and play with it for days. This curiosity was also the reason why I wanted to be a scientist. I was interested in chemistry and experimenting with different things. But when I found out how long it could take to become an established scientist, and with no guarantee of finding anything meaningful, I changed my mind and decided to become an engineer.

Now, as a software engineer, I still get to experiment and create things. And, to this day, I dream about combining my interests and building software that can predict the results of chemical reactions.

Molly: why I chose social media over stegosauruses 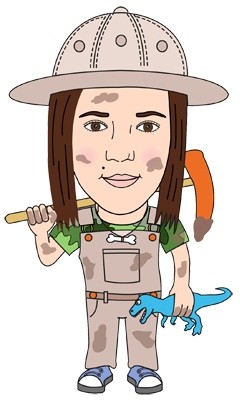 The career aspirations of my formative years saw me thoroughly captivated by the idea of donning a pith helmet, wielding a pick-axe and digging my way to untold prehistoric discoveries. Perhaps owing in part to the fact that a scratchy VCR recording (complete with ‘90s advertisements) was one of the few videos we had in the house, Jurassic Park quickly became a childhood favourite. Come to think of it, the Indiana Jones series was also a repeat offender. I’m sensing a recurring theme here…

Regrettably, I never did get the chance to unearth a triceratops, but my affinity for the dino-kind lives on through household knick-knacks and Jurassic Park reruns.

These days, I’m much more tied to the modern world via my ensuing career in communications and marketing. High school career advisors (and a dash of realism) made me come to terms with the fact that a career in archaeology was likely to see the extinction of any job opportunities and associated bank balance, so I opted for a slightly tamer route – at least until I’m old enough to unashamedly sport a pair of cargo pants and set out on a whole new career adventure.

Marni: my journey from Dolittle to doing lots

Every school holidays I would be shipped off to my grandparents’ place down the coast where many a rainy day was spent re-watching old musicals on VHS. So naturally the first thing I ever wanted to be was: Eliza Dolittle in My Fair Lady. I eventually realised that selling fake flowers on a movie set that no longer existed wasn’t really a career, so I knew I had to rethink things.

It was in the middle of bossing one of my four brothers into playing an ugly stepsister at our annual Christmas-day-get-the-kids-out-of-the-way-for-a-few-hours performance that I realised I wanted to work in the theatre.

A couple of rather interesting musical-theatre experiences later, including learning to sing about killing chickens in Hungarian, I realised that I wasn’t a great singer and the real world was actually quite interesting. I haven’t opened my theatre, but I do get to write stories most days – and I think everyone’s relieved I’ve stopped singing.

Chanon: my evolution from Super Saiyan to Master of the Web 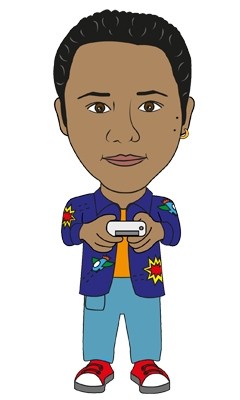 As I grew up, my creative streak took me through a range of passions. I wanted to become a cartoonist thanks to my favourite TV shows, Dragon Ball Z and Doraemon. I formed a band with my friends. I cried when England lost to Argentina in the World Cup. And I dreamed of becoming a photographer so I could hang out with beautiful models. But, I was probably most passionate about making games.

This stemmed from playing board games with my family early on, which then evolved into creating my own elaborate games and sharing them with friends and family. As my interest in computer programming developed, I moved my love for games online and I played around with creating virtual games and applications.

Nowadays, as a webmaster, I’m still passionate about programming. And I still enjoy games!

When I was a kid, all I wanted to do was read. And read I did, whenever I could – after school, in bed, in the bath, while eating (when I could get away with it) …

But I didn’t think you could make a career of reading, so I figured I would be a doctor when I grew up. But when I found out how many years of study it would take to specialise, I baulked and considered other careers, including engineering. I thank my lucky stars I never went down that road – and I’m sure I wouldn’t have made a good engineer anyway.

Instead, I studied English lit and got into publishing – so I wound up with a career in reading and writing after all!

What did you want to be when you were a kid? Let us know by leaving a comment below.