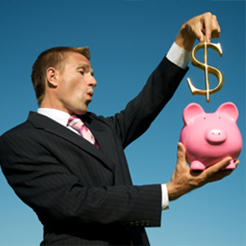 Who wants to be a millionaire

According to new projections, financial services are set to overtake mining when it comes to industries that will make you mega-rich.

Oliver Williams, an analyst with WealthInsight, told the Sydney Morning Herald: ‘Although Australia’s established multimillionaires, such as Gina Rinehart and Clive Palmer, still have large stakes in the mining sector, most of the country’s emerging millionaires are profiting from financial services.’

The projection is that by 2017, the number of millionaires in Australia will increase to 402,000 – that’s a 33 per cent increase from 2012 – and that 100,000 of these new millionaires will rise from the financial services sector, which now accounts for 10 per cent of Australia’s national economic output.

As of 2012, 18.4 per cent of Australian millionaires gained their riches from financial services, while 14.3 per cent of millionaires came from the ‘basic materials’ sector, comprising agriculture, mining and metals.

If you would like to pursue a lucrative career in financial services, check out our range of online courses – and show them the money!