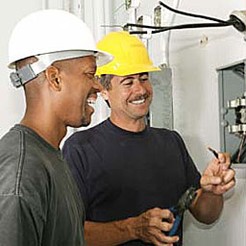 The government's decision to slash skilled migrant numbers in a bid to boost local employment has received a mixed response from industry, unions and academics.

The government is trimming the number of skilled workers to be accepted into Australia next financial year by 14 per cent to 115 000 – the first reduction in more than a decade.

The move comes after the turbulent global economy pushed unemployment to jump to 5.2 per cent last month.

Immigration Minister, Chris Evans, says we need to ensure that ‘migrant workers are meeting skills shortages and not competing with locals for jobs.’

They say the cuts are warranted because unemployment in the building sector is rising, with an expected loss of at least 50 000 jobs over the next 12 months.

Sectors still experiencing skills shortages, such as engineering, information technology and health care, will not be affected by the cuts, while employers can still sponsor migrant workers if they can prove local labour is not available.

‘There are still skills shortages in some sectors and these measures will enable industry to continue to source the skilled professionals they need while protecting local jobs and the wages and conditions of Australian workers,’ Senator Evans said.

The Opposition welcomed the moved, but Shadow Immigration Spokesperson Sharman Stone says more jobs could have been saved if the government had acted sooner.

‘There have been 10 000 jobs lost since October, including areas in mining and manufacturing,’ Dr Stone said.

‘We are not just in the business of jobs but housing and other services and it is going to be difficult enough for Australians without having to compete with new arrivals.’

But not everyone agrees cutting immigration will have a positive impact on Australian employment and the state of the economy in the long term.

Phil Lewis, Professor of Economics at the University of Canberra, said the move could cost local jobs and lead to greater skills shortages.

‘Migrants actually create jobs, they need houses and the retail sector receives a boom because migrants tend to spend more. Migration should be seen as a long-term policy to encourage economic growth and protect further skills shortages,’ Professor Lewis said.

The Australian Industry Group, which represents 10 000 employers, agreed that immigration is one of the drivers of future economic growth.

‘The general skilled migration program should maintain a long-term focus on adding to the pool of trade skills that are essential to build the economy in the coming years,’ Ai Group chief executive, Heather Ridout, said.

The migrant worker program is expected to be cut back further in the May budget.