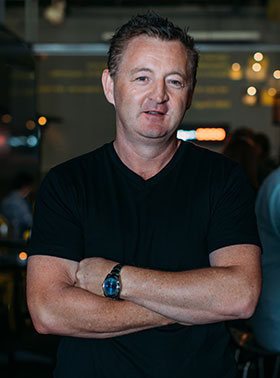 Luke Mangan is one of Australia’s leading chefs and restaurateurs, highly regarded internationally as a shining example of contemporary culinary culture.

Luke’s Australian and international establishments range from fine dining to more casual fare and are renowned for his unexpected creations, he’s also written five best-selling cookbooks and an autobiography ‘The Making of a Chef’. Luke has his own range of gourmet products and makes regular TV appearances, both in Australia and internationally.

I left school at 15 and started my chef apprenticeship. From there, I worked two weeks for free at Michel Roux’s Waterside Inn in London – just so he would take me on! I ended up working there for a few years. When I moved back to Australia, I opened my first restaurant in 1999 – Salt, in Sydney’s Darlinghurst. I did a string of jobs to save enough money to open with my business partner, including selling sausages at the markets.

How long have you been in hospitality?

What inspired your career as a chef?

I was terrible at school – I knew I had to get out of there as soon as I could. I really didn’t know what I wanted to do but I knew I really liked cooking. Mum was the king of the kitchen in a house of seven boys – she cooked everything from scratch and I loved helping her. I think my love of cooking came from seeing people enjoy the food I had made for them – it was quite a satisfying thing.

A pilot! I always had a fascination with flying.

There is very rarely a typical day in this job. But if I am in Sydney, I’ll start the day with a swim in the ocean – more often than not I’ve got some sort of jet lag so it helps start the day. Then I will have breakfast and a strong coffee and arrive at the head office for morning meetings and a catch up with the staff. I will then head to Glass Brasserie for lunch service and the afternoon will involve a tasting of some sort – either for one of the restaurants or a new menu roll out for our Virgin Australia business class menu, followed by a few more afternoon meetings and skype chats with our staff in Asia.

What was your first job and what do you think it taught you?

My first real job was working in a kitchen at the age of 15, straight after I left school. At school, I use to run amuck so it definitely gave me the discipline I needed! In the early days I quickly realised that being a being a chef involves long hours, hard work in a hot and not always glamorous environment – with many hours spent away from family and friends.

There’s been so many! But cooking for Richard Branson on his Necker Island was definitely one of those never forget experiences – It was me and a couple of my chefs at the time, Richard had invited us to cook for him on his private island – at first I thought it was a joke. We flew first class to Necker and were taken to the Island by private speedboat; it was like something out of a James Bond film. It was an amazing experience and one I don’t think I will ever forget. What happens on the island, stays on the island!

The best part is being able to travel the world as part of your job. Being a chef can give you the chance to work in some of the best kitchens and we I’ve been able to cater for so many amazing events, cook for celebrities, political figures and even royalty!

The worst part would have to be the hours in the kitchen, especially in the early days when you’re doing doubles! It’s not great on your social life.

Why did you want to move from chef to restaurateur?

A few things really, a mix of ego at the time was certainly a factor, I guess at 29 I was ready for the next challenge in my career and I wanted to be my own boss and run a restaurant of my own – even though that came with a lot of blood, sweat and tears – I don’t regret a thing.

What advice would you give to someone wanting to work as a chef?

That this is definitely not your average 9-5 job! You need to be prepared for that from the get-go. But at the same time, this industry can be so rewarding – I’ve been able to work in kitchens all over the world and being a chef has sent me to some truly amazing places.

What advice would you give to someone wanting to start their own restaurant?

That owning your own restaurant is more than just the food served within it. The food is only going to get you so far – it’s about the whole package; the service, the lighting, the music and having a great team behind you. You need to be smart about it from a business side of things – be aware of the costs of running a business – in the early days I didn’t focus enough on the business side and that’s what almost sent me broke!

That’s hard to choose just one, but I think it would be opening my first restaurant, Salt in 1999. At the time Sydney was at its peak just before the Olympics so it was a great time to open a restaurant.

Tell us about what projects you’re involved in

Expanding our casual dining concept, offering diners a more informal dining experience. This will hopefully roll out further on land and at a sea over the next 12 months, including a new Luke’s Kitchen to open in the new year at our Waterloo Sydney headquarters – so watch this space!

Check out more on Luke’s projects and connect with the team that helps make it all happen!
Web: https://www.lukemangan.com/
Facebook: https://www.facebook.com/LukeWMangan
Instagram: https://www.instagram.com/lukewmangan/

Start on your very own road to success with a course in Hospitality, Business or Entrepreneurship