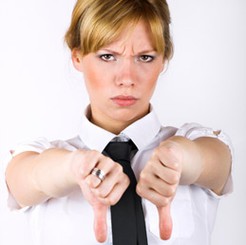 Eight reasons not to accept a job offer

Many of us assume that any job offer is a good job offer, but this isn’t always the case and it’s important to remember that you’re in control of what you’re willing to accept – it’s not just up to the employer. You have to weigh up the pros and cons of any job, as well as follow your gut instinct – and sometimes there can be good reasons for turning down a job.

There are the obvious deal-breakers, such as a salary so low that you’d make more working at Macca’s, a location that’s too far away or hours that are impossible for you to work, but there are also a number of other valid reasons for saying, ‘Thanks, but no thanks.’

1. High turnover in the role

It’s important to ask your interviewer about the person or people who previously performed your role and why they left. If you find out that they’ve burned through five different people in the last year, you have to ask yourself why. There must be something about the role or the environment that keeps driving people out – of the company, and possibly out of their minds.

Here’s where your gut instincts will come into play. If behind the forced smiles in the interview room you sense there lurks a snarling control freak with anger management issues, or your employer comes across as sleazy, creepy or dishonest, run – fast.

3. They have unreasonable expectations

If they’ve handed you a job description three pages long listing responsibilities that even the most efficient multi-tasker wouldn’t be able to handle, their expectations may be a little unrealistic. This can occur particularly when they’ve just set up a new role, with no one before you to have broken it in. If they’re not open to letting you negotiate your tasks and make the role your own, they may just be setting you up for failure, as well as a possible sacking.

4. They won’t give you straight answers

If your interviewer can’t give you a straight answer to questions about your role, career development or the company, that’s a very bad sign. Communication and information exchange should be direct, open and honest. If it’s not, they’re not a company you want to work for.

The alarm bells might start going off as you walk by other employees’ desks and notice that they’re all men whose walls are plastered with pictures of semi-naked women draped over motorcycles. As the only woman there, you realise that you may feel a tad uncomfortable.

If you find yourself in an environment where you stick out like a sore thumb, this may not be the job for you.

The decision about whether or not to take a job shouldn’t rest on salary alone as it’s not all about pay, especially if there’s a good path for career development and progression. Unless you plan on leaving within the year, you have to think about long-term benefits and not just short-term gain. However, they should still offer you a salary that’s commensurate with your skills and experience, and value you appropriately. Some companies, however, may offer other forms of compensation that are worth taking into consideration, such as flexible working hours.

For some people this may not be a deal-breaker, but for others the idea of spending most of their waking hours in a dark and dingy office with vomit-coloured carpet is so depressing that they’ll be driven to drink. If you’re particularly sensitive to your physical environment, you might have to think twice before working in such surroundings. Either that, or be prepared to be creative about how to make your space more bearable.

This might sound airy-fairy, but sometimes it just comes down to bad vibes. If you have a bad gut feeling about the job or about the people or company, sometimes it pays to take heed.