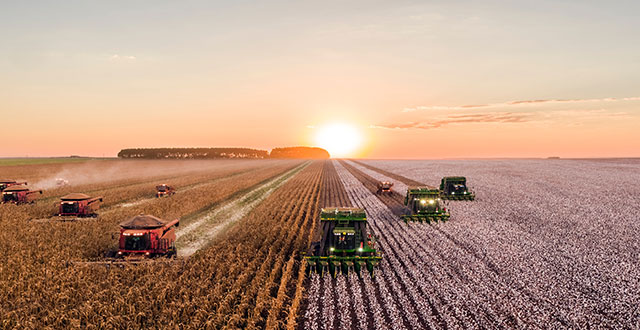 Agriculture: What does the future hold?

How do you provide quality food to people at a decent price without having a negative impact on the environment? This is the fundamental question that the agriculture industry constantly seeks to answer. So what are the current and future trends that will impact the industry’s ability to provide a solution?

We sat down with two senior agricultural academics at Charles Sturt University to find out what issues the agriculture industry is likely to face in the coming decade, and the ways it is potentially going to meet them. As David Kemp, Professor of Agricultural Systems at Charles Sturt University, sees it, there is an underlying factor that will influence how farming is done in the future.

“When it comes to Australia, our farmers are very efficient but we’re going to have to get far more efficient in the future. With the way the population is increasing – in Australia and around the world – we’ll probably have to produce twice as much food as we do now. But there’s no more obviously arable land. And with no more land you then have to improve the productivity of what you’ve got. And that’s hard. All the simple stuff – find new land, clear it and grow more crops – was done in the last 100 years. You could, but today we have to think a lot harder about how to maximise the productivity of that land, and at the same time not do any damage to the environment.”

Jim Pratley, Research Professor of Agriculture at Charles Sturt University, echoes this basic driver for the future of the farming industry – the need for more food to feed a growing population.
“There is a pressure to produce more. We will need 70 per cent more food by 2050 in the world than at the start of this century. That means that in the first half of this century we will be producing more food than we have in the rest of the history of human civilisation. World population – we have 7 billion now and it is projected to be 9.3 billion by 2050. So there are a few challenges out there.” The whole package This equation is not as straightforward as it first looks. For Professor Kemp, it is not simply a case of
growing more food by any means necessary.

“Agricultural science needs to take careful account of not just food production issues, but environmental issues and social issues around food production. Students now and in the future need to take a systems perspective when meeting the challenges of agriculture.” Professor Pratley emphasised that agriculture must operate within a demanding marketplace. “An industry does need the confidence of the people – we call it social licence – the idea that you are not going to do anything damaging during production. And if you do something that destroys public confidence, you lose that social licence quickly. Markets are more savvy about insisting on environmentally sound products, so the market demands are increasing for that sort of process.
Now social licence features in most sectors’ planning, and they can’t afford to jeopardise that market.”

That social licence can certainly be jeopardised, but Professor Kemp feels that in many ways this can be due to misinformation. “There is a distortion in the media about large companies. The big operators have more resources to fix up environmental issues. Many farms now – approximately two-thirds – have off-farm income. They are not using the farm to fund something else. In fact, income is coming from off-farm avenues and used to improve the farm and make it a better place to be. Pollution from agriculture is a lot less than it has been previously. In Japan, the biggest form of pollution in waterways, for instance, is chemicals and fertilisers running off from golf courses.
“The other media problem is that people in cities see and hear stories about waste, but those stories ignore how agriculture works; it depends on rainfall, temperatures etc., so sometimes you get a rapid burst in growth – more than the market can take. Then you stop producing and you may not get a crop. Anyone who has a home garden and grows a few zucchini plants will know about that kind of glut. People don’t willfully go out to create waste, but agriculture is a biological system, and that’s the reality of what can happen.”

The integration of technology into agriculture industries is already having a significant effect on the sector in terms of both the structure of the workforce and the increases in productivity that tech innovations facilitate. Professor Kemp explains some of the changes technology will help implement in the sector. “There is a trend for fewer people actually working on the land – labour for harvesting and so on. And as people become more affluent, they are increasingly disinclined to do hard labour. So machinery and technology in all its forms is being increasingly used.

“Here’s an example. Every sheep will have an electronic ear tag, so the farmer will know where they all are because the tags get read automatically when they come near watering points or gates. Some farms include digital scales, so as the animals cross them, the farmer can detect animals that might be losing weight and are sick, so they can be quarantined quickly to prevent sickness spreading and those animals treated. “In cropping, there’s a lot of fascinating work being done with robots and automated machinery for monitoring and managing crops. In horticulture, for example, machinery will be able to go along rows of trees, analyse each piece of fruit individually and if it meets certain programmed criteria in terms of size, shape, colour and so on, will automatically harvest it. So you can harvest individual fruit at the perfect stage. There are also trials of automated, driverless tractors currently being done.  But the important part of these changes is that you will still need people with agricultural expertise to inform those decisions, to determine how crops and livestock should be managed, to tell the technology what to do.”

Professor Pratley sees data as having a significant role to play.

“Now agriculture is one of the biggest users of smart technology, which is generating a lot of data, and the question is what we do with all that data. Equipment can link to the network and can automatically transfer data about what you are doing when. So your whole farm operations are identified and the network can send you reminders about optimal times to be doing certain things. If that is replicated in local, national, even global levels, that is a pretty powerful tool. For instance, if all the veterinarians input into a database all the diseases that they come across on a daily basis, including where those instances are located, that database becomes very important in terms of identifying hotspots of disease. If there was an outbreak of, say, foot-and-mouth disease (which fortunately we have never had in Australia), it could be immediately identified and the biosecurity systems activated to contain it.”

The drive for more

Technology will certainly be a significant factor in increasing our ability to grow more food. And, as mentioned, that is the most pressing requirement for agriculture given the way national and global demographics are heading. Professor Kemp suggests that there are options and ideas that the industry is exploring to achieve this.

“We should perhaps be pushing harder the productivity of areas close to markets in the big cities, so there is less pressure to transform wilderness areas into viable land, which would take a greater input of resources than increasing yield from already cultivated land.”

“I can see a rapid increase in what is called protected cropping, growing fruit and vegetables all year round in glasshouse conditions. There is one company now in South Australia that will end up growing most of our tomatoes. It is powered by solar, the water is desalinated seawater (which has the benefit of not having any terrestrial diseases), and because the system is based on aquaculture [growing plants on water], it is not dependent on soil, which helps minimise pesticide inputs. This system could be used to grow things in places where we haven’t been able to before.”

According to Professor Pratley, all these changes to the agricultural sector in terms of how it functions will significantly affect the roles available to people working in the industry.

“There is a big demand for people with qualifications, not just in agriculture but also in the management of big data, robotics, drones, electronics, IT, engineering related to agriculture, as well as the specialists across the agricultural production systems. We need people skilled in managing technological systems. There is also a pull for more people with good business and marketing skills. Previously, marketing was done by industry bodies, but these days a lot of agricultural products are marketed by the company that produces it.”

Professor Kemp agrees that there will continue to be demand for workers in the sector and that attaining a high level of skill in the new redefined specialities could well be the best way to secure a dynamic, rewarding career in the future.

“To get more from the land, farmers are going to look more and more to expertise from specialists – and that is likely to be where many of the best jobs are in the future. But generally, there will remain a good demand for people to work in agriculture.

“But if you want a good career in agriculture, one that goes somewhere and in which you can develop, you may well need further study to become a specialist professional. Increasingly around the world, especially in Europe and the United States, you really need to do a postgrad course to be regarded as a professional. Without those professional qualifications, you can still get a good job, but probably without the scope for progression.”

Professor Pratley certainly sees a bright future for the industry as a whole.

“The rate of change in agriculture has been spectacular. I don’t think even five years ago you could have predicted the sort of jobs that are happening now. In the early part of this century, agriculture was in the doldrums, but now there are roughly four jobs per graduate, and the whole image of agriculture has turned from something quite negative to now very positive. The prospects for agriculture products is probably brighter than it’s ever been. All sectors in the industry are certainly in a buoyant, if not booming, mode. And Australia is in a good position to provide quality food to those who can afford to pay for it, such as the emerging middle class in Asia.”

As Professor Kemp says, “there’s absolutely nothing more important than food”, and while the challenges for future students of the agricultural sciences are significant in terms of providing enough of that essential need, the opportunities for innovation could be almost limitless.

This article was produced for Career FAQs by Charles Sturt University.