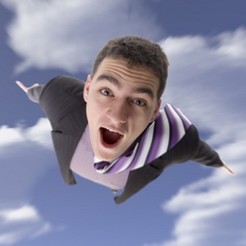 Have you ever had a dream that seemed impossible? Have you ever wanted to solve the energy problem, or walk on water? Even translate your dog’s barks? Well, this is where Engineers Australia steps in. Looking to bring engineering to the people, their ‘Make it So’ campaign aims to highlight what engineers do – or, more importantly, what they can do.

The campaign allows people to submit their ideas, dreams or inventions – no matter how big or small – from which one will be chosen and ‘made so’ by a team of engineers.

‘If you can dream it, then an engineer can make it – the more creative the better! We’re looking for the next great engineering idea,’ says Jamie Penrose, Director of Communications and Marketing at Engineers Australia.

Launching on 16 February, the idea is to lift the veil off the engineering industry, creating awareness of what engineering is all about – for engineers themselves as well as the general public.

‘We want to bridge the gap between people’s perception of engineering and what it is we actually do. We know that many Australians struggle to understand what engineers do and at times engineers can find it difficult to explain,’ says Peter Taylor, Chief Executive of Engineers Australia.

This original promotion has already prompted much response with over 170 ideas already submitted before the official launch and over 7500 supporters on the website.

Engineers Australia is calling for more practising engineers, engineering students or even engineering enthusiasts to get behind the campaign and register as an ‘advocate’. Becoming an advocate gives you the power to submit, rate, comment on and share ideas via social media.

Ideas that have been submitted range from the practical, ‘make it so solar cells could be sprayed onto bricks and roof tiles’, to the crazy, ‘make it so my car goes underwater.’

Some ideas also verge on the impossible, ‘make it so a machine helps us to see our own future days, weeks, months, or years ahead of us.’

Each week 10 top ideas will be short-listed, from which one will win an Ee PC laptop. The final winning submission will be chosen by an Engineers Australia panel and announced in August to coincide with Australian Engineering Week.

If your mind draws a blank when you think of engineering – don’t worry, you are not alone. An Engineering Australia-commissioned research study revealed that engineering was one of the least understood professions. However, it had a high level of advocacy, meaning that people would willingly recommend it as a career choice.

The study found that while engineering was the second most recommended career behind medicine, it had a low level of public understanding. This benchmark study was the spark that started the ‘Make it So’ flame.

‘The most common misconception about engineers is that they only create bridges and buildings. There are many different types of engineering disciplines. From the creation of the cochlear implant to the Airbus A380, and everything in-between, engineers have a hand in nearly everything we interact with each day,’ says Penrose.

Engineering encompasses a wide range of disciplines, including aerospace and agriculture, making it hard to define exactly what an engineer is or does. So hard, in fact, that a competition was run last year to find the perfect definition. The winning definition by Daniel Indyk was commended for summing up the entire profession in a single sentence.

‘Engineering is the discipline of using I(E)NGINUITY combined with the known laws of science to design and create devices and systems that improve the overall quality of life for mankind.’

And with Australia currently experiencing a skills shortage in engineering, the opportunities for engineering students are limitless.

This broad industry will also make the execution of the ‘Make it So’ campaign extremely interesting and diverse. With so many fields under the engineering umbrella, the possibilities for submissions are only limited by imagination.

So perhaps you have a great idea to stop global warming. Or maybe you’ve always wanted your very own robot to do your homework. Whatever it is, put on your creative thinking caps and let’s give the engineers a challenge to remember.