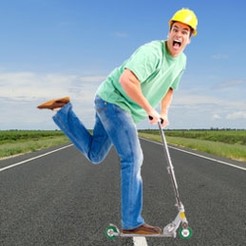 Engineers: Rebels with a cause

Like a tall, dark and handsome stranger, engineering is often considered the mysterious outsider in the room full of Average Joes. It is one of the most misunderstood industries, with misconceptions largely surmising it to be a predominantly boy’s domain where people design bridges and not much else.

With Australian Engineering Week next week, starting 1 August, we’ve looked back on how the tide has started to turn. Recently this wave of ignorance has been met with a tsunami of interest and activity in the industry, from both males and females, looking to remove the veil that has shrouded the industry.

First, it started with a competition in 2009 to find an accurate definition of the term ‘engineering’, won by Daniel Indyk for his single sentence that managed to sum up the entire profession.

‘Engineering is the discipline of using I(E)NGINUITY combined with the known laws of science to design and create devices and systems that improve the overall quality of life for mankind.’

February saw Engineers Australia launch another competition, titled ‘Make it So’, this time to encourage the public to push the realms of possibility and come up with ideas, inventions or changes they wanted made to the world – one of which would be chosen to be ‘made so’.

With almost 7000 ideas submitted, ranging from bizarre to genius, the competition highlighted just how limitless and necessary engineering is to society.

‘If you can dream it, then an engineer can make it – the more creative the better!’ says Jamie Penrose, Director of Communications and Marketing at Engineers Australia, of the ‘Make it So’ competition.

To infinity and beyond

And now, to celebrate all that is engineering – which as we have discovered encompasses pretty much everything – with Engineering Week. To mark the occasion, there are a multitude of events to sink your teeth into, including a golf challenge, a tour of the RTA crash lab and, of course, a bridge-building competition.

In the spirit of 2010 being the ‘Year of Engineering Leadership’, Engineers Australia are showcasing leaders and role models in the field, including Australian-born NASA astronaut, Dr Andy Thomas, and paper plane World Champion Dylan Parker.

The range of events and speakers all over Australia highlights the diversity and importance of engineering. And, with the current skills shortage in the industry, it also shows the endless opportunity and potential for up-and-coming engineers.

Battle of the sexes

The gender gap is also closing with many females choosing to pursue engineering as a career.

One female engineer showing the boys how it’s done is Kelly Clarkson. Unlike her American Idol namesake, Clarkson chose to study a Bachelor of Automotive Engineering at RMIT because she enjoyed studying maths and physics at school. She now works as an engineer in product development at Ford in Victoria, overseeing crash tests as part of the safety team.

‘I like the fact that my work revolves around vehicles, and when those vehicles become available to friends and family, I know that I actually played a part in bringing the car to the market,’ says Clarkson.

Even trailblazer Barbie® has embraced her inner geek as a computer engineer in her 125th career, complete with glasses, bluetooth headset and binary code-inspired fashion. For the first time ever the team behind the iconic blonde took to the web, calling upon her fans to vote for her next career choice, with Computer Engineer Barbie® and News Anchor Barbie® taking the crown.

And like Computer Engineer Barbie®, real engineers like Clarkson and the people behind Engineers Australia are helping to bring engineering out of the dark and into the public’s eye. With the spike in interest, engineering is fast becoming a familiar face, one that’s garnering a lot of attention. So make an effort this August and get acquainted with the industry that has brought you everything from the toaster to the Internet, because you can be sure they have some great plans for the future.