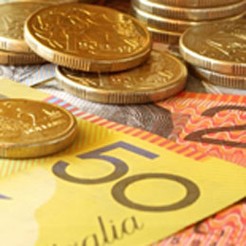 Rudd's unprecedented call to the nation's 10 million workers to forgo pay rises, coincided with his warning to employers not to sack people with the protection of jobs fast becoming the priority of 2009.

'In these times, employers must do their utmost to protect their workers from dismissal, knowing that these workers will serve them well when times turn good again. Workers, too, must restrain any wage claims,' he said.

'Right now it's jobs that matter most because the global financial crisis has been the destroyer of jobs.'

With the economic downturn tightening the job market, employees have less power when it comes to pushing for a pay rise regardless of the PM's plea.

Mr Rudd said he was pleased that some employers were asking employees to accept shorter working hours rather than lose their jobs.

'That encourages me, because at this time Australians need to look out for each other – as we have done so many times in the past when the going has got tough.'

The Rudd government insists it is also doing all it can to help ease the pain of the lowest earners.

A second stimulus package is said to be in the pipeline and low-income tax relief is under consideration as the government attempts to boost the economy.

In a plan worth $2.75 billion over 2009–10, the low-income tax offset would be increased as well as the income level at which people face the 30 per cent tax rate.

The accelerated tax cuts would reduce the need for an increase in the minimum wage, which would most likely force some sectors to shed staff, but workers' unions say the government should not use tax cuts as an excuse to keep wages down.

Business groups are also pushing for tax refunds to be offered to small and medium business operating at a loss to help them survive the economic crisis.