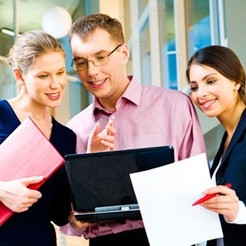 Should social networking be allowed in the workplace?

The boundary between work and personal life has become blurred – and with the rise of social networking sites that line has become very blurred indeed. Whether you like it or not, social networking has now permeated every corner of both our personal and professional lives – we do it at home, we do it at work, and businesses themselves have gotten in on the action, using social media as a marketing, brand-enhancing and networking tool. It’s here to stay, and you can’t put the Facebook/Twitter/LinkedIn genie back in the bottle.

Social networking: part of the fabric of daily life

According to Australian Bureau of Statistics data, there are currently 9.3 million Facebook and 1.2 million Twitter users in Australia. That’s a whole lot of social networkers – and many of them are conducting their social networking activity at work.

A recent post from popular social media blog Mashable reveals that business employees visit Facebook from the workplace more than any other internet site, including Google. A whopping 6.8 per cent of all business Internet traffic goes to Facebook – double that of Google and triple that of Yahoo.

With that kind of social networking activity taking place in offices around Australia, what are organisations to do? They could ban access to social networking sites altogether, ignore the problem and hope it goes away (not likely), or embrace the trend and try to use it to their advantage. Unfortunately, most businesses haven’t worked through the issue enough to even have a formal social networking policy in place.

Does your workplace have a social networking policy? Does it work? What system do you think would work best? Leave a comment below and let us know what you think.

The case for social networking in the workplace

Many companies prohibit access to Facebook and other social networking sites on company computers because they believe such access leads to decreased productivity. However, a recent study by the University of Melbourne found that employees who regularly surf the net during business hours are actually more productive than those who don’t.

According to the study of 300 workers, 70 per cent of people who use the Internet at work engage in ‘Workplace Internet Leisure Browsing’ (WILB), surfing the net for personal reasons. Surprisingly, those who do so within reasonable limits (less than 20 per cent of their work time) are more productive by around nine per cent.

You might well ask yourself how this can be possible – wouldn’t surfing the net cause people to waste time, lose focus and be less productive?

Not so, according to Dr Brent Coker, from the Department of Management and Marketing at the University of Melbourne. The answer lies in the fact that short, harmless web-browsing breaks help us to resume our work with refreshed concentration. ‘People need to zone out for a bit to get back their concentration. Think back to when you were in class listening to a lecture – after about 20 minutes your concentration probably went right down, yet after a break your concentration was restored,’ says Dr Coker.

‘It’s the same in the workplace. Short and unobtrusive breaks, such as a quick surf of the internet, enable the mind to rest itself, leading to a higher total net concentration for a day’s work, and as a result, increased productivity.’

For Gen Y, social networking is an integral part of a normal day, and access from work is seen by many as more a right than a privilege. Allowing social networking in the workplace could therefore be one way of retaining what can be a skittish and restless group of workers.

Besides, some argue that Gen Y, having grown up hooked into social media, mobile phones, iPods and other technologies, is a generation that grew up multi-tasking and is particularly adept at it. ‘They could have a chat site open to talk to their friends while they’re doing their work – quite effectively, I might add. That’s the way they’ve been training their brain to work for the last 10 years,’ said Tracey Hodgkins of the Australian Experiential Learning Centre in Perth, in an interview with news.com.au.

The case against social networking

But ‘multi-tasking’ is a myth, according to researchers at Stanford University, who found that those who attempt to multi-task perform worse than those who do one task at a time. So if you think you can successfully listen to your iPod, send a text, check your email, update your Facebook status and watch a video on YouTube without anything falling through the cracks, think again. Multi-taskers were found to have difficulty concentrating and keeping things sorted in their brains.

Furthermore, while productivity may increase for people who surf the net only moderately while at work, it suffers when web surfing exceeds a moderate level, as it does for Internet addicts – a label that could be applied to 14 per cent of those in the University of Melbourne study.

With all this conflicting information, what are employers to do? Given the extent to which social networking has infiltrated the workplace, it’s an issue that needs to be tackled – yet, surprisingly, a recent Manpower survey of 34 000 employers worldwide revealed that 75 per cent of organisations do not have a formal policy in place regarding the use of social networking sites at work. It seems that many companies are adopting a ‘wait-and-see’ approach before developing their own formal policies – but what are they really waiting for?

The survey found that three out of four employers indicated that their organisations had no formal policy regarding the use of social networking sites at work, while five per cent were unsure of whether or not their organisation had such policies.

Twenty per cent of employers responded that they did have policies in place regulating social networking in the workplace. Of these, the majority (63 per cent) believed that these policies were most effective in helping to avoid losses in productivity; one third indicated that their policies helped to protect intellectual property; three in ten believed their policies helped to protect their organisation’s reputation; 14 per cent cited talent recruitment as one of the most positive outcomes; and only two per cent said that their company’s social networking policies were not effective.

When asked to specify the top potential benefits to be gained from external social networking, employers identified brand building (20 per cent), fostering collaboration and communication (19 per cent), new talent recruitment (15 per cent), candidate assessment (13 per cent), and professional development of employees (13 per cent).

The Manpower report raises a salient question: how can companies embrace social media technology and unleash its potential power, while minimising risk and misuse? After all, social networking isn’t going to go anywhere, and it’s something that every individual and every business has to learn to manage.

Instead of passively waiting to see how social networking trends develop, employers could get on the front foot and harness their popularity to increase their business’s value, boost their reputation, help advance their corporate goals, and keep their employees engaged. It shouldn’t be about trying to control employees’ social networking activity, but rather channelling it for everyone’s mutual benefit.

Besides, any attempts to totally block social networking activity at work are ultimately futile. Even if social networking sites are banned from employees’ computers, they can always get onto their iPhones and Blackberries and continue their surreptitious Facebooking and tweeting.

Twitter, Facebook and other social media platforms have the potential to benefit businesses in ways that have yet to be fully explored. The genie is well and truly out of the bottle and progressive companies will attempt to ride the social networking wave to better business.

Drop by our Facebook page. (But maybe not while you’re at work!)